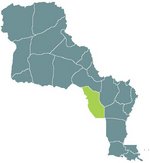 A map of Louisianne, showing the Garonne-Neuve.

Named after the Haute-Garonne in France where the most part of the original settlers of the region came from, it is fitting that Toulouse is the département capital as well as the préfecture.

Principal cities of Garonne-Neuve include Auterive, Aurignac, Carbonne, and St Lys-Volvestre, all of which were founded by emigrants of southern France, thus bringing a heavy Gaulhosc influence to the region.

Garonne-Neuve is one of the largest production centres of oil in Louisianne. In this region we find the national headquarters of Petrol Louisiannais, SA, RepubliComm and Credit Louisiannais. Bordered by the Arquansa river to the west, Garonne-Neuve is the effective gateway to Castilian America, which is fitting, as the Haute-Garonne of France is the portal to Iberian Europe.