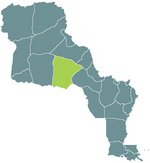 A map of Louisianne, showing the Dordogne.

Named after the river and département of France. The inhabitants are also called the Dordognais.

Dordogne is one of the largest producers of corn and soy in the nation, exporting a great deal to the NAL and other neighboring countries.

Concern has been voiced in recent years because much of the agriculture of the region is drawing on ancient, pre-historic aquifers that do not appear to be replenishing.