It is divided into two Départements, Bretagne, with its capital at Brest and Gascogne, with the capital at Pamplona.

Northernmost Prefecture of Louisianne, Nova Navarra, as most of the locals call it, is one of the more eclectic populations in the country, as it houses large numbers of Mormon immigrants from other nations who have national festivals throughout the summer, including Scandinavian Days and so forth. The capital is at Pamplona, named after the capital of the Navarran region of France. Most Hutterite colonies in Louisianne are found within the borders of Nouvelle Navarre.

It was created in the early 1900's as a territory of Louisianne in the division of the Préfecture du Nord. It remained a terriotry until the late 1960's, finally achieving a significant population base for the application to Préfecture status. Nouvelle Navarre is known for its strong stance on Native American issues. They have granted the tribes full citizenship rights and, to a large extent, autonomy in internal matters. Because of this many areas of Nouvelle Navarra are attributed to the various tribes and have not begun to be settled until the last 30 years. 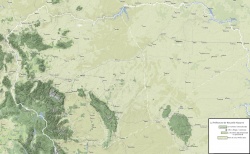 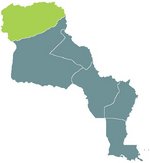 Nouvelle Navarre is limited by: