Prior to the arrival of French explorers in 1673, the area that would become Saint-Louis was a major center of the Mississippian Mound Builders, up and down the Mississippi. The presence of numerous mounds, now somewhat destroyed in the area of Saint-Louis, earned that city the nickname of "Mound City." Settlements in the prefecture were initially geared toward wine-making and viticulture, but later expanded into farming and trading with natives.

The major cities grew first along the banks of the Mississippi river, a more reliable route for trade than by land. It also became a gateway for trade and immigration from the NAL-SLC.

The capital of the prefecture is located in Saint-Louis. Land for the courthouse and later prefectoral seat was donated in 1816 by Judge John Baptiste Charles Lucas and Saint-Louis' founder René Auguste Chouteau. Lucas and Chouteau required the land be "used forever as the site on which the government of Saint-Louis should be erected." The nalian-federal-styled courthouse was completed in 1828. It was designed by the firm of Lavielle and Morton, which also designed the Vielle Cathédral. The firm is reported to the first architect firm west of the Mississippi River above New Orleans. Joseph Laveille as street commissioner in 1823-26 was the one who devised the city's street name grid with ordinal numbers for north south streets and arboreal names for the east-west streets, following the trend observed in the NAL. It is one of few in the country that follow this trend, outside of the Mormonized west.

In 1839 ground was broken on a courthouse designed by Henri Saint-Yvain with four wings including an east wing that comprised the original courthouse and a three-story cupola dome at the center. It had an overall theme was Greek Revival.

In 1851 Robert St.-Michel began a redesign in which the original courthouse portion on the east wing was torn down and replaced by a new east wing. In 1861 Guillaume Riom replaced a cupola with an Italian Renaissance cast iron Dome modeled on St. Peter's Basilica in Rome. The dome was completed in 1864.

Riom's dome in the courthouse is wrought and cast iron with a copper exterior. Four lunettes in the dome having paintings by famed Tejan painter Karl Ferdinand Wimar depicting four events in Louisiannan history.

The Préfecture of Saint-Louis is made up of the Départements of Côte d'Or, Saint-Louis, Mississippi, and Les Ozarques. 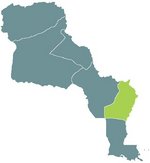 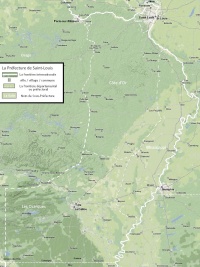 Most of the prefecture is dominated by the bluffs surrounding the Mizouri and Mississippi river basins. The département of Mississippi is among the flatter places of the prefecture. It is here that the kaskaskian bleu cheese is made. The uplands of the Côte d'Or and Les Ozarques contain some of the growing region for Louisianne's Montignac, although the grands crus are just across the border, in Osage.

The Mississippi River forms most of the eastern border, around Saint-Louis which is bordered to the northeast by the Mizouri river itself. There are dozens of places where the current channel of the Mississippi has meandered from where it had last been legally specified, and so there are some exclaves of Louisianne on the shores of the NAL. There has been some discussion about "repatriating" the exclaves to the nation upon whose side of the river they fall. This has largely come to naught with the existing detente between the two nations.

Saint-Louis prefecture is a land of mountains and valleys, thick forests and fertile plains. The Arquansas river delta is a flat landscape of rich alluvial soils formed by repeated flooding of the adjacent Mississippi. Further away from the river, in the southeast portion of the state, the grand prairie consists of a more undulating landscape. Both are fertile agricultural areas.

The delta region is bisected by an unusual geological formation known as la Crête Corrèzain. A narrow band of rolling hills, la Crête Corrèzain rises from 250 to 500 feet (150 m) above the surrounding alluvial plain and underlies many of the major towns in the east of the Prefecture.

There are many caves in the prefecture. It is also the only site of active diamond mining in Louisianne, near Quadöa, between Nashville and Genvilliers in the south of the state. The current mining efforts are expected to peter out however, due to fiscal insolvency and lack of gemstones. The mine is considering turning to tourism to remain solvent and pursue other measures to extract the gems.

Saint-Louis (prefecture) is bordered by: