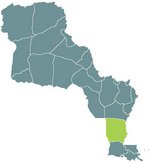 A map of Louisianne, showing the Loire-Neuf.

Patterned after the Loire valley of France, the Loire Neuf is home to many châteaus harking to the glory days of the French Royals. Today these châteaus are held as national treasures of Louisianne and while some are held as government residences, others are museums and still others are privately owned.

Loire-Neuf was Lousianne's first attempt at vignobles, and there are several notable among those that remain to this day, including the Château Beauvais, and Château Yquem de Louisianne, and many of the residents of the area are actually descended of Côte d'Oriens and not the folk of the Loire valley. The Loire-Neuf is on the international registry of 'Places to See'.

La Grande Dame de Louisianne, Anaïs Michelle Bouvier, calls the Loire-Neuf her home. It is expected that she and her family will retire there in the coming months.

Sous-Prefect Jerôme Baldi was recently appointed Prefect to fill the vacancy left by Marie-Claire Gildersleeve's election to the First-Presidency. Local elections concluded on 20 September, 2006, with Emmelot Brock winning 57% of the vote. This was confirmed by the Saint-Ongean Parliament during Vendémiaire (September-October) of that year.