Zarahemla is the largest city and capital of the Département of Alpes-Rocheuses, Nouvelle Cournouaille. It is the largest city along the Alpes-Louisiannais and forms the heart of the Agglomération Zarahémlain. Zarahemla, or Zarahémla, as it was transphonated into French is named after the capital city of the race of 'protagonists' in the Book of Mormon, a book the Mormons hold as a second book of scripture, comparable to the Bible. This capital city was established in the mountains of the Préfecture du Nord, which later became, in part Nouvelle Cournouaille.

Located in the eastern Great Plains, in the foothills of the Alpes-Louisiannais or Alpes-Rocheuses, Zarahémla is subject to beautiful views, with a dramatic and awe-inspiring skyline to the west. The vielle ville is located on the Rive Est of the Platte River, near the confluence of the Ruisseau des Cérisiers, about fifteen miles from the piedmont.

Capital of the département and former seat of the Préfecture, Zarahémla has a population of 555 639 by itself, and the Agglomération maintains a population of 1.935.934, discounting other large settlements to the south. This population places it among the most populous of Louisianne. Nearly 1.000.000 of the population are Mormon, although a large portion of the others are not.

The primary temple of the Mormon Faith is located in Zarahemla.

Often called the Ville Mormone due to its heritage, Zarahémla is also the highest city of any substantial size in Louisianne, being over 1.5 km high. Zarahémla is also noted for its influence on agriculture in the region, with the Style Mormon using a grid system and historically mandated green-space, coupled with wide streets radiating as spokes from a wheel with the church owned 'Temple Square' at its center, harking to Paris in France with its wide boulevards and serpentine alleys.

The national TGV line was completed in early CCXI (late 2003), and regular service has continued from that time to all points south and east. CFL projects completion of the LGV line to the Alpes-Argentés sometime in 2010. Zarahemla is home to the University of New Cornwall. 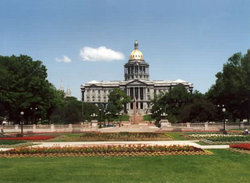 Founded in the Territoire du Nord as Auraria, the city was soon eclipsed by mormon settlers who enlarged the settlement and made it their own. This caused no small amount of friction between the miners and the Mormons. As the Mormons expected, and were granted a large amount of autonomy from the central government, the miners had little recourse and resorted at times to mob violence.

A detente was reached after the assassination of Joseph Smith, Jr., and has persisted since then. The community today is replete with cultural events and social gatherings, many of which centering on the Mormon Tabernacle Choir and Temple Square.

Zarahémla is located near the far western border of Louisianne, equidistant from Tejas and Alta California. To the west are the Alpes-Rocheuses and the east the great plains of North America.

Zarahémla is dividided into 79 quartiers. Both the city government and the local neighborhoods use these divisions as they govern the city. Most refer to specific regions, and are used as such in giving directions.

These quartiers are not set in stone, as there are several others used to refer to portions of quartiers, such as the downtown, the civic center, the Gare du Temple, and other locales of importance throughout the city.

The Alpes Rocheuses west of Zarahémla act as a ubiquitous navigational landmark.

A ZATC street-car at the Place de la Gare station.

While Zarahemla was heretofore served primarily by diesel rail and the ageing Autoroute system, it is now being connected to the rest of the nation through high-technology means. Among them is the TGV line which has connected it to all points of the compass, including a spur that is in construction toward Manti and, eventually Tejas. The old autoroutes pass through the center of town, but do not produce the large interactive traffic circles as are found in the NAL, as this part of Louisianne is not as built-up. 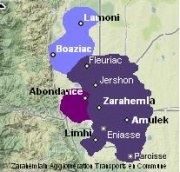 ZATC or Zarahémlain Agglomération Transports en Commune coordinates the regional transportation, holding jurisdiction over much of the commuter rail and bus lines. What ZATC doesn't control is controlled by CFL The ZATC has 5 metro lines running and a sixth péripherique line that circles the midpoint of the city under construction. The Metro lines are supplemental to the existing Street Car lines.