According to the International Railway Union, the definition of high-speed rail is public transport by rail with a possible speed above 135 Milles per hour (200 kilometers per hour). Most of the high-end trains travel at top service speeds between 170 Milles per hour (250 km/h) and 200 Milles per hour (300 km/h). The current high speed record for a wheeled train was set in 2007 by a French TGV which reached a speed of about 389 Milles per hour (about 575 km/h *here*). There are rumors of magnetic levitation trains far exceeding that speed, but none has been substantiated at present.

The use of the term TGV and its application vary from country to country, but all hinge on the idea of specialised track for the high-speed vehicle, the rolling stock, operating practices and the speed. While there was a decline in the use of railways with the mass production of automobiles following the end of the Second Great War, this has not brought about the end of rail travel, and in most countries a rail system does exist.

High-speed rail was the attempt of the rail industry to appeal to those for whom other travel methods were not fast enough or efficient enough. They have successfully done so, as can be seen by the proliferation of high-speed rail, especially in North America. Because of the distance-shrinking nature of the high-speed trains, cities that are many hours by car from Paris are now finding themselves as 'bed-room' communities, where people live their lives, but work in Paris. Similar effects are happening in Lyon and other major markets of TGV.

The earliest high-speed train was Xiñcansen of Japan, followed by the French TGV. Because these trains often traverse national boundaries they are not all the same, as power requirements vary from nation to nation. 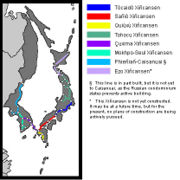 A map of Japan's High-speed lines
Japan, as one of the initial creators of the high-speed train has one of the most prolific national high-speed lines. It has also exported its technology to FuTaiNan, and this has been further connected with other regions in China, with limited success.

The Vostok (Rus: "Восток") series of high speed trains is sometimes referred to outside of the SNOR as the "White TGV", referring to its resemblance to the French TGV train. Indeed, the resemblance is so acute that many suspect that Russian industrial espionage was at work in its development. Vostok was largely developed in parallel with the French train and officially introduced late in the following year, though testing actually continued for three years after the trains were "officially" introduced before they were released to carry passengers.

Whether the trains were actually aided in development by industrial espionage is not clear, and there are a few marked differences from the TGV. Most notable of these is the tilt mechanism which was included in all but late production models of the train, but never employed on passenger-carrying runs. According to persistent rumour vehemently denied by the Russian Government, all but one test run of the Vostok employing the tilt mechanism resulted in a derailment. Whether or not this was so, it is a matter of record that the tilt mechanism was kept in a locked-down state and never actually utilised except in testing. The mechanism was not installed on late production Vostok trains.

Vostok-capable high-speed lines were installed between St. Petersburg, Moscow, Kiev and Volgograd, then later extended to Nizhni Novgorod. Plans to extend the lines eastward to Yekaterinburg and Chelyabinsk were shelved in the late 1980s due to budgetary constraints, then scrapped outright after the fall of the SNOR.