Republic of the Two Crowns

This curious country is comprised of the Kingdom of Veneda and the Kingdom of Lithuania; the autonomical region of Galicia is part of Veneda. The Republic has acted as a kind of buffer state between Russia and the West for most of the 20th century. More recently, since the fall of the SNOR regime in Russia, the Republic has taken on more of a mediatory role, serving as a go-between in East-West relations. A common neutral meeting place for talks between European countries is Wileń in Lithuania. The Republic recognises Romuva, Roman Catholicism, the Eastern Orthodox Church and Greek Catholicism as official religions.

The Republic, the Kingdoms of Estonia and Latvia, the Free City of Danzig, Nassland, the principality of Skuodia and a number of Scandinavian and German states together form an international union called the Baltic League, which is a descendant of the old Hanseatic League. The League has traditionally been one of commerce and trade, though mutual defense has also been an important aspect of its activities.

RTC the accepted abbreviation of Republic of the Two Crowns, both in news media and public affairs. TCR (Two Crown Republic) is viewed as unacceptable. Sometimes the RTC is referred to as Veneda-Lithuania or simply The Republic. People from the RTC are usually referred to as Erdekani in Wenedyk (from RDK), in English as Coroners, Erdekans or more often as Veneds.

Despite its name, the Republic is a constitutional monarchy with an elected king. With the exception of the years 1918-1939, the Republic has been in existence since 1569, albeit under a different name. In its current form it was established after the Second Great War, in 1949.

A short explanation of the rather complicated state structure of the RTC can be found here.

See: Political parties in the RTC.

Furthermore, the Republic is subdivided into 18 provinces, five in Lithuania, 13 in Veneda. Four of these together constitute the Autonomous Region of Galicia, which is part of Veneda. In a referendum held in November 2004, the populations of Galicia and the Lithuanian province of Volhynia expressed their preference for a Galician-Volhynian autonomous entity, which would de facto turn Galicia into a Venedic-Lithuanian condominium. This decision has not yet been put into effect though.

See http://steen.free.fr/rtc/provinces.html for the ethnic composition of the provinces.

Furthermore, the Republic has one overseas territory, Venedic West Africa, which encompases almost the whole length of the Gambia river. Apart from that, the Republic was temporarily in charge of the League of Nations Mandate of South West Florida.

(A longer version, including maps, can be found here)

History of the Republic of the Two Crowns (before 1918 known as the Republic of Both Nations) until late 18th century is more or less similar to history of it's equivalent *here* -- Poland. To shorten it, the Republic of Both Nations was the largest country of Europe, but it survived several severe strikes in 17th century, when it had had to fight with three very strong opponents -- Sweden, Russia and Ottoman Empire -- almost at the same time. It did survive those wars, and didn't even lose any territory, but remained very weakened.

Despite that Republic was the largest European country, it was very weak and unstable internally. Being neither a real republic, nor a monarchy, it was in fact ruled by nobility. The nobles, gathering in Sejm, were very quarrelsome and had many different views on the just politic for Rzejpybiełka. The worst of it, each of the had a right to efficiently disturb a session, because they had a right to veto every legislation and this one single veto was enough not to realize the project (so called Liberum veto). It often happened that Republic's neighbours took advantage of it by bribing one of the members.

Thus the view of the Republic in the 18th century was that despite it was so great country, it was very weak. It wasn't suprising at all that at this point (1772) happened the First Partition. And here we find first difference, maybe not very significant, as Austria didn't take part in this Partition. Second Partition took place in 1793 and just afterwards happens, what I guess is the biggest difference between RTC's and Poland's histories. Unlike *here*, the nobility very concerned with what was happening started to think rationally. They decided to stop quarreling and find some way to defend their country. In 1795, king Głurzan II Poniatyk was dethroned and replaced with August IV, who successfully built an alliance with Scandinavia and Austro-Dalmatia. Thus, he managed to prevent a third partition. However, pressure from both Prussia and Russia remained strong.

After his death in 1803 Sejm decided for a splendid move and elected Napoleon Bonaparte as the king of the Republic. Napoleon managed to restore some territory lost to Prussia, but as he was *there* less greedy, he decided not to fight against Russia.

Reign of Napoleon was a chance for the Republic to change much, but that didn't happen, the nobility remained unstabile and quarrelsome. However weak, Republic existed peacefully until First Great War. The fact that country existed badly influenced its residents. Rotten nobility of RTC did nothing but quarreled and Rzejpybiełka didn't even join the war during the first year. It declared war on Germany in 1915, in fact only after the Germans started to conquer their territory. However, RTC's army was weak and was completely overrun by the Holy Roman Empire. The First Great War ended with the Republic being split up into a Kingdom of Veneda and an independent Kingdom of Lithuania, both essentially German satellite states.

After the Second Great War, the kingdoms Veneda and Lithuania were reunited on an equal base into the Republic of the Two Crowns. The newly founded Republic was even expanded with some former German territories.

Flag and coat of arms

GENERAL DESCRIPTION OF THE COUNTRIES GEOGRAPHY 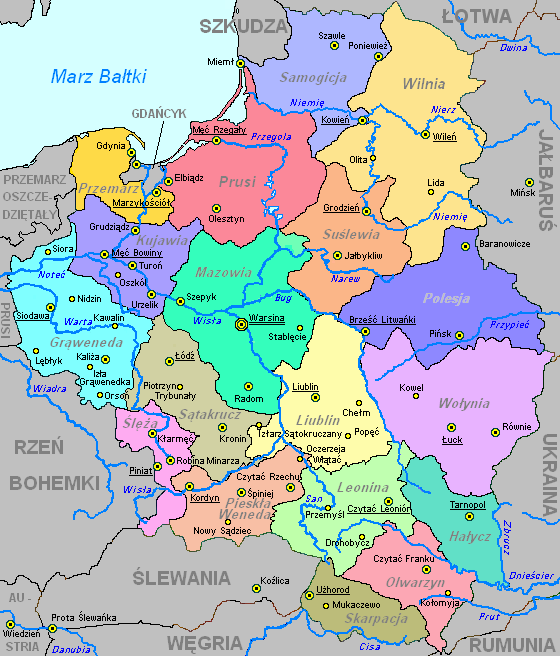 See Cities in the RTC for a list of cities and towns.

See, among other things: How to tell if you're Venedic.

The RTC is a country of many nationalities. The linguistic division of the RTC is given in the table below:

Military of the RTC uses conscription. Military is unified in whole country, but generally the conscripted soldiers serve in the country where they live (that is, people from Lithuania serves in Lithuania, people from Veneda - in Veneda, people from Galicia - in Galicia). Situation had been somewhat different previously as many non-Galicians served in Galicia to quell possible disturbances. Ar force of the RTC traditionally includes many combat aircraft, mostly manufactored in the RTC itself. The navy does not plays a very important role, the base at Jakowina, Gambia now has only a few ships stationed in it and thus the coastline of the RTC is pretty short and there are no large distances on it. Having had a bad experience with the nuclear weapons when Łódź was nuked, the RTC for a long time did not employ any nuclear weaponry, but in the 80s it developed a program of field RA weapons, despite of a somewhat large public outcry. The RTC has no plans to employ strategic RA wapons in near future.

More information on history, population, and maps can be found one the RTC's homepage: http://steen.free.fr/rtc/index.html.

A monarchy as idiotic as this ought not to exist at all.