Chemin De Fer Louisiannais is the state-sponsored rail system of Louisianne. For most of its existence it has remained fully 20 years behind the times, buying older styles of trains from France. In recent years a dramatic refurbishing of the rail network has been capped off by the creation of major TGV lines. These lines, coupled with increased tourism to Louisianne from the NAL and Oregon, have lead to increased growth of revenue for CFL. With the settling of hostilities with Tejas it is expected that rail connections will continue apace, and, given time, Alta California will bring peace to Deseret. Plans for a direct connection toward the west coasts are well developed.

CFL claims proud ownership of some of the longest rail tunnels in North America, created to reach the ski and mining towns growing up in the Alpes-Argentés.

With the new TGV lines in full functionality, CFL is pushing a publicity campaign to help the public understand how much time using the CFL will save them. An example of this advertisement can be found on the CFL Website.

Under the leadership of Joseph Thomas Robespierre, the various railways of Louisianne were unified under the Chemins de Fer Louisiannais in an CXXIX (1920). The railways that were purchased, and in some cases nationalized, are as follows:

Prior to an CXXIX (1920) there had been a growing corporatization and conglomeration of railways. Prior to an CIX (1900) there were nearly as many local railways within Louisianne as there were days in the year, although some were simply local 20 kilometer rail-lines.

On 11 Nivôse, CCXI, (January 1st, 2003) CFL began TGV rail service from Zaraëmla and Lyons-sur-Mizouri to Paris-sur-Mizouri and a second service from Paris-sur-Mizouri to Le Caillou, Baton Rouge, ending in Nouvelle Orléans. The popular response to these services led to the enriching of the TGV network to current standards. Further expansion is planned in the north and west, however this is somewhat hampered due to lack of demand.

TGV service from Toulouse to Santa Fe in Tejas is currently under review by the two governments. 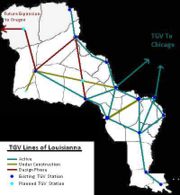 Approximation of the TGV réseau of CFL in Louisianne
Due to the geographical lay of the country, the rail system in Louisianne has resulted in a Y-shaped network of high speed rail lines. CFL operates two non-stop lines to Chicago from Lyons-sur-Mizouri and Saint-Louis. The regional hubs of CFL are: