The Republic of Alta California is a representative republic. The three branches are the Presidencia - Presidency, Legislatura - Legislature, and Corte Nacional - National Court. The legislature is bicameral, consisting of the Senado - the Senate, and the Consejo de Representantes - Council of Representatives. The president is Arnoldo Schwarzenegger, former body builder, movie star and immigrant from Austria. The president is allowed to serve up to three three-year terms.

The main political party is the Partido Nacionál de la Gente - National Party of The People (PNG), which is a conservative party, and has provided most of the presidents almost since the split from Mejico. Other political parties are: 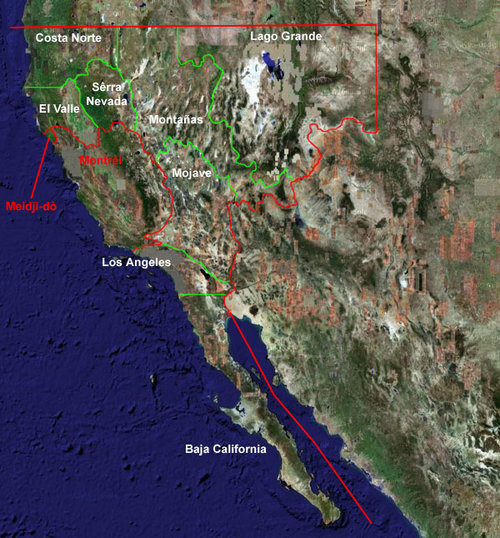 Alta California is divided into eight provinces based loosely upon geography:

Further Divisions are as follows:

In 1822, Mejico declared independence from Castile and Leon, and Alta California at first declared allegiance to Mejico, realizing that Mejico had much more power than Castile and Leon did in the New World. The other incentive was that anyone who swore loyalty to Mejico was given a land grant. Most of the big ranchers supported this move as it preserved their ranches, and the smaller land holders did as well (because Mejico also threatened to take land from those who supported Castile and Leon.)

By 1834, the promises of Mejico failed to materialize. Mejico ignored AC almost entirely, focusing on matters closer to Mejico City. Californios saw themselves on their own, as well as distinct in culture from their Mejican overlords. A call for rebellion went out, almost unheeded by Mejican authorities, who chalked it up to the stirring of ignorant, backwards northerners who were no threat to the Mejican military.

However, by 1840, Mejico entered a civil war. Seeing this as an opportunity to fight back, AC, along with Tejas began a civil war on the northern front. Mejico, concerned more with controlling its inner territories decided to cut its losses and caved in to the demands of the rebels in AC, who demanded all northern territories granted under the old Spanish government, as well as Baja California (which Mejico allowed, because at the time it was sparsely populated, and of little interest to Mejico).

AC began to prosper, and interest began to center around the Los Angeles to San Diego area. AC divided its territory into provinces, and created among others, the Provincia de Monterey. The capital of the Provincia de Monterey has remained in Monterey, but the capital of Alta California was moved down to San Diego, as the harbor and coastline were more hospitable than the rocky foggy climate and area around Monterey.

Times remained unsettled in the new nation. Feelings of independence were still stirring among the populace, and the two major areas of civilization in AC were the Los Ángeles-San Diego areas, and in the north the San Francisco- Monterey areas. These were hotbeds of revolutionary fervor. Those in the north, in San Francisco (changed from Yerba Buena for some unknown reason) to Monterey began to see themselves as separate from their southern countrymen, primarily due to speaking a different language at home (Montreiano) as well as to differences in culture (although minor, still significant enough). They also had felt ignored by the new government in the south (at the time the entire northern part of AC was uninhabited by non-Indians).

When Tejas began to stir, and escalated age old border conflicts into all-out war, the Montreianos in turn saw it as a chance to break away. AC and Tejas began heavy fighting along their borders as Tejas pushed westward on a mission to conquer new land. The battle front stopped at the great Rio Colorado. This action by Tejas and the diverted resources in Alta California sparked revolution in the north.

Fighting in the north was not nearly as bloody as the earlier war of independence from Mejico, or the border battles with Tejas, but they were enough of a nuisance to make AC rethink its position, and come to a decision concerning which is the more valuable fight. AC had decided that a fight on two fronts was a bad idea, and the situation with Tejas was of a much graver matter. Seeing a golden opportunity, Montreianos presented a list of demands to AC, and declared that they would cease fighting if the Monterey region was given independence.

AC at the time considered this a smart move, as they viewed most of Montréi as only suitable for cattle ranches and possibly small scale farming, so they signed the Treaty of San Carlos. There also was not much of a choice for AC. It was either continue fighting on two fronts, wasting resurces and men, or choose the bigger battle and cut their smaller losses.

It had also lost territory to Montrei. For about a decade after the Mejican Civil War, Montrei had simply been a state within Alta California, and the city of Montrei (then called Monterey), had once been the provincial capital. When fighting with Tejas began soon after independence of both countries, Montrei began to revolt and Alta California, seeing Tejas as the more important enemy, signed in 1851 the "Tratado de San Carlos" - Treaty of San Carlos, written in both Castillian and Montreiano (Called "Tratao de San Carlos" in Montrei), which released Montrei from Alta California, giving it independence. Alta California did not realize what it had lost, thinking the region was impassible mountains, a swampy valley, and coastal valleys full of swampland. The region that Montrei now claims was soon found to be perfect for farming, and the mountains full of precious minerals and metals.

Alta California's domain is quite large, however most of it is desert or mountainous, save for the northwestern part of the nation which is rainy, moist, and has endless forests. Alta California has not been able to fully exploit its riches, which include lumber, minerals and metals, oil (which is known to be found off the coast), and agricultural lands, due to the extensive militarization Alta California has experienced ever since fighting with Tejas had begun.

Alta California is one of the poorer nations in the region. Conditions are as good as any militarized third world nation. It has never learned to exploit natural resources well, depending upon premanufactured items and supplies already processed to make weapons and machines of war. However, with the recent hostilities with Tejas ended, Alta California is able to scale back militarization, put its soldiers to work on public works projects and improve the nation. Both Montréi and Mejico would like to give Alta California a hand, at least in an advisory role to help it rebuild itself.

These islands are closest to the administrative center of San Diego. They are home to several Txumax Villages.

Guadalupe is one of several islands not located on the continental shelf of North America. Cedros is a part of Baja California proper.

The official stance on religion is that any religion is not to be discriminated against, but because most of the leaders are staunch, conservative, traditional Catholics, the Catholic Church has considerable influence and all other religions or denominations tend to have their permits to build churches and places of worship denied for long periods of time or indefinitely. It is often said of Catholicism in Alta California, that all of the priests and nuns live in the 21st century, but their convents and seminaries are stuck in the 15th century.

Many of the smaller towns and villages are often outright hostile to other denominations and there have been reports of non-Catholics being run out of towns, especially closer to the disputed Deseret area or in very remote places.

This sentiment has been inflated in recent years due to increasing hostility in the Deseret region, especially to Mormons. Non-Catholics entering Alta California are usually advised to keep an eye out and watch their backs when outside of the main urbanized areas. They also often experience many more delays at the immigration checkpoints when entering the country via the borders or through aerodromes.

Alta Californians in the more urbanized centers tend to be a lot more liberal in religious outlook, but they still maintain some level of paranoia. They also hold high suspicion of those in Meidji-dò and Montréi, due to their differing religious practices (Zesucutò, and Xintò in Meidji-dò, and a rather Islam/Jewish influenced style of the Isidorian Rite in Montréi), as well as the religious liberalism in Montréi.