Tejas is a constitutional monarchy. Its legislature is called Congress. For further details consult Government of Tejas.

The first República de Tejas was a short-lived experiment in non-monarchical government founded in the 1828 as a reaction of the Mejican Creole aristocracy against both the liberal policies of the Kingdom of Castile and Leon and the Indian insurrection in Mejico once the Mechicas had gotten control of most Mejican territory and were moving north towards New Mejico and Tejas. In 1833 Mejico defeated the Tejians and claim Tejas as a Mejican province.

The Reino de Tejas can be seen as a return to a more traditional and common form of government and was founded in the 1840s during the Mejican civil war. At that time, it was a kingdom (1844-1898); but at times the government swayed between the presidency, which is really a form parlimentary monarchy or dictatorship, (1898-1904), a republic (1904-1909), and then back to monarchy (1909-1970), and then to a series of military juntas and civilian dictatorships (1970-2003). Until the discovery of oil and helium reserves, Tejas was a sparsely populated country of ranchers and cowboys, competing for land with the native Indios. The wealth of Tejas has grown considerably due to its oil and other natural resources. It is a member of OPEC (Organisation of Petroleum Exporting Countries) and HPC (Helium Producers Consortium). The recently deposed dictator of Tejas was Jorge Walker Bush (1988-2003). The present head of state is King Juan Carlos (born 1983, reign 2007- ).

The recent invasion of Alta California on the part of Tejas led to an unexpectedly rapid counterinvasion by allied forces of Alta California and Mejico. The latter overran Tejas from the south, capturing more than three quarters of the country. It was thought that Tejan strongman, Jorge Bush, fled the country on the eve of the fall of the capital Santa Fé in a fleet of dirigibles headed for Florida or Cuba. This was later proven to be true, as Floridian president Jaime Bush complied with extradiction requests from Mejico.

After the war, all internal and external functions of government were in the hands of the Mejican "Oficina de Ocupación Militar de Tejas", whose term was set to expire on 1 July, 2003 with the coronation of the heir to the Tejan throne. Unhappily, with the recent instability in Florida-Caribbea (the Caribbean Plan and the Cruzan Referendum), the coronation was put off til September. The heir, Doña Maria Gabriella Fürsten zu Solms-Braunfels, was crowned at the Cathedral of Santa Fé, Tejas, on September 11, 2003. Mejican president Vicente Lobos presented the new monarch with a ceremonial deed to the domain of Tejas. While left unspoken amid the festivities, Lobos also presented to the new monarch a wartorn and restless land in much need of healing. A long-time resident of the NAL, the queen has secured the friendship of that American power and has been at the head of the campaign to reform the Tejan government with American help.

The line of succession of the Fürsten zu Solms-Braunfels follows, into which a certain family of disaffected Franco-Louisianan nobility married, direct-line descendents of Louis XV, disenfranchised heirs to Louisiannan principality, and French Royalty, thus lending further credibility to a Tejan royal family.

Ferdinand (d. 1783) - Prince of Solms, Lord of Braunfels, Grafenstein, Münzenberg, Wildenfels, and Sonnenwalde was the ancestor of Tejas's first king, Carl. Friedrich Wilhelm (1770-1814) was Ferdinand's son and heir, and his descendants continue as electors of the Holy Roman Empire to this day.

Until the discovery of oil and helium reserves, Tejas was a sparsely populated country of ranchers, cowboys and plantation owners, competing for land with the native Indios. The wealth of Tejas has grown considerably due to its oil and other resource wealth. It is a member of COPEN (Community of Petrol-Exporting Nations) and HPC (Helium Producers Consortium).

Gutierrez is deposed and a republic is formed. A series of weak governments plunges Tejas into turmoil; the monarchy is restored amidst cries for reform and stabilisation.

Recession and war with Mejico prompt the military to form a coup. Several violent and short-lived military dictatorships eventually fail when the Anglo civilian bureaucrat Jorge "George" Bush seizes control in 1988. Rational at first, his rule is marred by increasingly bitter struggle with Alta California and sour relations with Mejico. Amidst allegations of war crimes, he is deposed by invading Mejican forces and flees to Florida-Caribbea. Jorge is not well received by his brother Jaime, the President of Florida, on account of his country's troubles with imminent war. Jaime deports Jorge to Mejico where he is tried of war crimes and executed.

Towns such as Neue Braunfels and Carlshafen reflect the German heritage still much in evidence in Tejas. Names of cities like Paįlankys, Žemumai, Bizoniškis shows the Lithuanian heritage (see Lithuanian colonies). 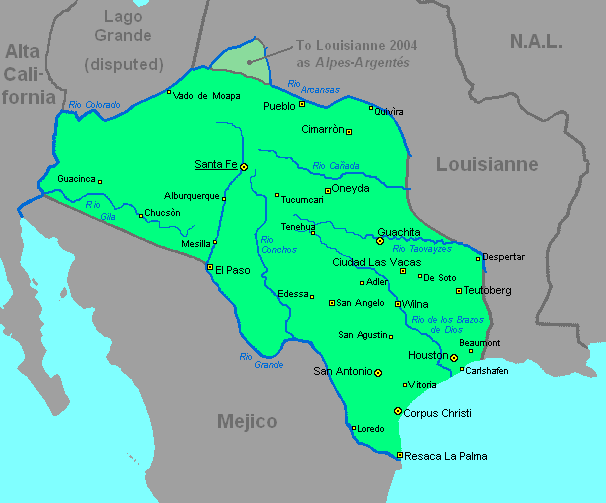 During early 1988 following the years subsequent to the benign days of Jorge bush. Whilst regarding Tejas trade policy, the bush administration had generally emphasised the pursuit of free trade policies. Tejas was admitted through a series of bilateral Trade agreements with countless countries. It was during this period that tejas had materialized comparative advantage and experienced swarm of cheap exports and truncated imports.

Although Trade policy was not all indulgent, Tejas had occasionally espoused protectionist policies in agriculture. This alone generated foreign resentment. Developing countries started to attribute all responsibility of untenable growth to foreign Countries such as Tejas and their persistent maintenance of protectionist trade barriers.

With the prospects of a weakening economy and inflated prices escalating in the horizon along the late years of the Bush dictatorship, the ensuing effects of Tejas high and rising current account (trade) deficit, resulting from imports rapidly exceeding its exports. In recent years Tejas has stressed efforts of renewing speculation of free trade relations with Louisiana and its other southern and western counterparts.

Tejans' national tax burdens are amongst one of the lowest in the world, the Tejan government has instituted a national tax cut for all taxpayers. Among other changes, the lowest income tax rate was lowered and the top marginal tax rate descended to further invite back capital, for stimulating growth after late years of weakened growth during the Bush era.

Some policy analysts have attributed some of the rise in income inequality to the Bush Tax Cuts of the dictatorial Bush era. Others attribute much of the rise to changes in technology, trade and immigration, and a decline in labor unions, among others. public debate is still present to take exception to such credentials.

Tejan economist had advocated Tax cuts on the sole basis of the ‘Laffer curve’, that the tax cuts actually paid for themselves by generating enough additional revenue from additional economic growth to offset the lower taxation rates. However, income tax revenues in terms of dobles did not regain their FY 2003 peak until 2009. Although there is still speculative debate on whether the tax cuts had generated more revenue, but it was beheld as the only feasible alternative because after The 2003 Tejan war and threats of recession, there was a demand for stimulating spending and reinforcing the military.

In the past years much of Tejas arable land has experienced mass cultivation; among its neighbouring competitors Tejas is ranked #1 for total livestock and livestock product receipts. It's ranked #2 for total agricultural receipts, behind only Alta California. In terms of revenue generated, Tejas's top five agricultural products are beef cattle and calves, cotton, broilers (young chickens), greenhouse and nursery products, and dairy products.

Tejas Economy today exists with one of the most farms both in number and acreage in the American continient. Tejas is a leader in nourishing its vast Livestock. The largest source of agricultural revenue in Tejas comes from the sale of beef cattle. Tejas produces about 20% of the global beef cattle exports and ranks #1 in the value of cattle raised. Other important livestock products include broilers (young chickens) and dairy products, followed by chicken eggs and hogs. Sheep and lambs and turkeys are also commercially raised in Tejas. Tejas raises more sheep and produces more mohair from angora goats than any other of its neighbouring countries.

Other major field crops in Tejas are sorghum grain, peanuts, rice and cane for sugar. The leading fruits produced in Tejas are watermelons, grapefruits and cantaloupes. Important Tejas vegetables include onions, potatoes, and cabbages. Tejas is the #1 producer of cabbages amongst its neighbouring competitors. Tejas is also a leading producer of pecans. Mushrooms are also grown commercially in Tejas.

The majority of the population is composed of Tejanos, a broad spectrum of Iberian aristocracy, a large mestizo landed gentry and middle class. There are also large groups of Indios (Natives) and smaller minorities of Germans, Louisiannans, Americans and Lithuanians. The latter groups live mostly along the coast and the transportation mainlines that connect Mejico and Louisianna. While the Lithuanians were granted self rule to settle in Tejas in the 20s as per agreement between the Tejan king and the Foundation of Emergency Lithuania, that grant is no longer in force. All descendents of those early Lituanos are now full Tejan citizens. See Lithuanian colonies for more information.

How to tell if you're Tejan...

Castilian is the official language. Minority languages are also spoken in the barrios while the Felipese of the South East speak their own language very similar to Castilian.

Primarily Roman Rite Catholicism. Many Indios have retained their traditional religions or else practice both.