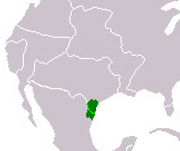 The Land of the Felipese

Felipia is the region found on both sides of the mouth of the Rio Grande, and is inhabited by the Felipese. The Felipese are an ethnic group in southeastern Tejas and northeastern Mejico. They speak a creole language derived from Castilian. The people are a mix of descendants of White Moors from Castile and Leon, Indios, and black slaves. Most Felipese are not purely of one of those groups.

In the late 1652, a very secretive group in Castile, descendants of the Muslim Moors numbering about 1,000 were discovered by the government of Castile and Leon. They had pretended to have converted before, but then Castile figured out their secret. The government was to send them to North Africa or kill them. The Castilian-speaking Moors fled Iberia to escape persecution and settled on the northern coast of Mejico along the Gulf.

For only a few years they were able to escape religious persecution. In 1660, the Castilian government in Mejico forcibly converted most to Catholicism. Many were killed, and some even became crypto-Muslims. Today, about 20% of Felipese are Muslim (including modern converts).

For years they tried to keep to themselves. The Indios accepted them, the Moors accepted the Indios. Remarkably, the Natives adopted (poor) Castilian, and development of the Felipese language began.

As slaves were traded in North America, some were shipped to their region. Many Felipese became slave-owners. In the late 1700’s, an abolitionist movement became very popular. By 1815, the abolition movement was complete and there were no longer any Felipese slave-owners. Slaves integrated into the population fairly quickly, most likely because the Felipese had come to hate slavery and racism so much.

When Mejico gained their independence, the Felipese fought hard not to be integrated into the Mejican culture. As most of them lived in the Tejas region, they were afraid of invasion because Castile did not recognize Mejico’s claim over Tejas. The Felipese were caught in the middle of a large conflict, and declared neutrality. They have tried to remain culturally secluded and neutral ever since.

Flag created at the 1900 convention. The stripes of red, white, and black, stand for the Indios, White Moors, and Black Africans (respectively) that make up their blood. The Green stands for the peace between the ethnicities.
In 1900 a convention of all Felipese met in a small village in North Mexico. They decided to name their homeland Felipia (Felipyă in Felipese) after the leader of the original settlers, Felipe Aguiar.

At first, the Mejican response was indifferent. The Felipese were small in number and kept to themselves.

In the mid-1800's, some small Mejican groups harassed the Felipese. Some burnt villiages, but generally, this was disowned by the Mejican government.

However, lately, that hostility towards the Felipese has grown. Not to the magnitude of committing hate crimes against them, but the many Mejicans and Tejans feel that they are a nuisance, especially since the sovereignty movement has grown considerably. They feel that they could not survive on their own and if independence was granted they would just end up wanting coming back into Mejico and Texas after not surviving without their help. The Felipese resent that feeling, often stating that they would undoubtedly be able to survive on their own.