The People’s Ecotopic Republic of Oregon is a large country in the northwestern quarter of North America, west of the S.L.C., north of Alta California and south of Alyaska. Oregon was founded by the various fur trading companies (notably the Northwest Company (merged with the Hudson's Bay Co. in 1822) and the Russian America Co., which still exists though hasn't been connected to Russia since 1917) and their local allies to keep out annoying adventurers, land claimers, and other competition. The Government is a mixture of native and immigrant aristocracy, corporations, unions, clubs, proportional representation, and municipalities. This governmental form evolved from cooperation between chiefs, fur traders, and merchants for the purposes of maintaining order and later independence. Any sizeable population percentage requires representation, thus religious leaders are also required to participate in the governmental process. 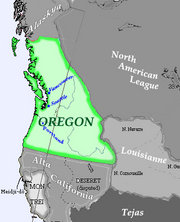 In the early 1800's, Russia sent a few thousand settlers to colonise the region now known as Oregon while the Hudson Bay Company were sending their colonists into the area. Since there was a significant enough proportion of both parties in the area (though there were certainly far more American settlers) both sides decided that they didn't want to fight a war over it and decided to instead establish the land of Oregon as a Russo-American condominium. This situation remained stable until 1903, when the First Russo-Japanese War broke out.

Alongside the formation of communist parties in Russia inspired by the writings of Karl Marx, there was another group of ecotopist parties inspired by the writings of Ernst Haeckel. This party, while not necessarily great in number, had the radical idea of turning Russia into an orthodox ecotopia. When the war broke out, they decided to escape the conflict and move en masse to Oregon. They chose Oregon because it was far more habitable than Alyaska. These immigrants got along very well with the natives; the natives taught the immigrants how to live on the land, and the immigrants taught the natives Orthodox Christianity and how to write in the Cyrillic alphabet.

In 1905, the Russians lost the First Russo-Japanese War and as a result lost control of Oregon. The Japanese tried to take control of this region, but America defended it from invasion, and it became an extraterritorial entity under the complete authority of the NAL. The most spoken language was English, but the alphabet with the most languages using it was Cyrillic rather than Roman. By 1915, Russian and most if not all native languages in the region were written in Cyrillic, while the Roman alphabet was used to write only one language, English. Cyrillic therefore became the inter-regional alphabet of trade and a cultural symbol of Oregon, whereas the Roman alphabet became increasingly associated with NAL control.

In 1917, the Russian Civil War began. While most of the Russian ecotopists remained in Russia after the Russo-Japanese Wars, many of these subsequently fled the country during the Russian Civil War. All factions became increasingly hostile to each other, and both the Whites and the Reds deemed these queer ecotopists enemies or at very least suspicious. Therefore, as the communists fled to Chukotka and Danubia, the remaining ecotopists fled to Oregon. This mass exodus caused a great shift in the culture of Oregon further to ecotopism to occur. There were now many more people in the region who identified uniquely as Oregonians rather than Americans or Russians. As a result, they protested the NAL's involvement in GW1 and sought to disassociate themselves from the rest of the country.

From the 1920's to the 1940's, there was an unsteady acceptance of the status quo. They were officially a nation in the Unincorporated Territories and thus answered to the Extraterritorial Lands Bureau in Philadelphia. This bureau governed foreign and inter-provincial relations for Oregon, but besides that, Oregon was effectively self-governing. In addition, Oregon was a member of the Council of Nations and Companies, the de facto government of the UT. Having a plurality of natives, Oregon had friendly relations with the other native nations, especially the Eastern Salish Empire. There were a few grumblings about NAL occupation and industrialism, but they remained a peaceful member of the NAL.

This relationship was entirely overturned after the NAL officially declared war on Germany in late 1941. In response to the subsequent expansion of the draft and massive deployment of troops, the nation of Oregon officially declared the Philadelphia government illegitimate in early 1942. The NAL initially tried to stamp out the "rebel" government for a few years, but the burden of trying to control this region soon became too great, and they finally recognized Oregon's independence in 1958.

The new independent government of Oregon took many drastic measures to distinguish itself as much as possible from the NAL. First, they made Chinook Wawa, a regional pidgin language, the official mandatory language of law and government. However, most of the population speaks English, so English is still the 'de facto' official language. However, more people in Oregon knew how to write in the Cyrillic alphabet than in the Roman. Both the Natives and the Russians learned English but wrote it in various Cyrillic orthographies. Therefore, in 1945, Oregon instituted a standard Cyrillic orthography as the new official alphabet and required it to be used in all official documents and transportation signage. In 1960, they instituted the daler, a new currency equivalent to the Alyaskan ruble, to replace the American pound. However, instead of subdividing it into 120 copecks, they subdivided the daler into 720 cash to make small quantities of money more easily.

In modern times, Oregon is an associate member of the Commonwealth of Nations and has tense yet peaceful relations with the NAL. Border crossings are open to those with passports, but the border between the two nations is clearly marked out in various sections of tall border walls. It is close allies with Alyaska, and has good relations with the rest of its neighbors, Alta California and Louisianne. For a long time, a great border wall barred all entry into Lago Grande from Oregon. But after the execution of Ouaren Gough in 2007, a civilian road was paved, and a border crossing was completed in 2009 to allow travel across the border.

Industries in Oregon are timber related, although there is a growing industrial base in Seattle and Portland.

Oregon is quiet in international affairs, and enjoys a peaceful existence, as they rarely come to the forefront in the news. While Oregon functions under an Ecotopic party system, all minorities are represented. The only time Oregon has come to the news front is when it helped to establish the Ecotopic Arab Republic of Al-Basra, and more recently with its help in establishing the World Ecotopic Reserve in central Hispaniola and the re-forestation of Haÿti, which is currently in progress.

A quirk of Oregon is the use of the Cyrillic alphabet, though the official language is English. The Cyrillic alphabet was introduced by Russian missionaries and has gained widespread currency. Japan's power over the region was extremely limited, as the few Japanese who do live there are descendants of the Tocugawa rebels and are afraid of the Meidji government.

The old flag of Oregon was showing the national animal, the beaver over the word ‘Ecotopia,’ written in Cyrillic showing the ecological focus in matters of state. In recent years, however, this flag of the beaver has been replaced with a new flag composed of five horizontal strips of blue, green, and white. The old flag, remaining a popular symbol among the people, is still seen however, among others taken into use by a political party.

Although individual regions, districts, cities, etc. enjoy self-government within Oregon proper, the nation is led by the Republican Assembly whose members (currently 339) are drawn from a variety of sources--ethnic groups, regional divisions, labor unions, trading associations, religions. As well as all of these, one hundred "At Large" Assemblymen are selected in a General Election every four years. The vote goes by party, and each party gets the number of Assemblymen equal to their percentage of the vote.

The Republican Assembly in turn elects the members of the National Council which in most ways functions like a cabinet in Parliamentary-style democracies. However, the twelve Councillors may be any adult Oregonian, and each serves for a fixed term--six years. The President of the Assembly (elected by that body each year from among themselves) is also Chair of the Council and has a full vote in the Council.

It is the Councillor for Justice who nominates members of the judiciary but requires the consent of the Assembly. In general, this means the National District Courts, with the National Courts of Appeal above them, followed the National Supreme Court on top. Judges serve for fifteen years and have the right to impeach their own members, as does the Assembly.