Hibercrosse - a version of the Native American sport lacrosse played on ice - is the national sport of New Francy. Based on the sport played by the Natives in and around Ville-Marie, hibercrosse is also popular in the North American League provinces surrounding New Francy, and other sufficiently icey parts of the world. It has in recent years spread southward with the development of inside ice-rinks, noteable with the creation of the New Orleans Saints team.

The modern game of Hibercrosse is the direct descendant of an amerindian game variously known in their various language as "little war" or "men hit a round object while bumping hips". The french missionaries who first named this game "jeu de la crosse" described it as a game played between tribes for prestige, conflict resolution and training of young warriors. It was originaly played with teams of over a hundred players on a field that could measure up to mile. Due to the violent nature of the game and the enthusiasm of the players, fatalities were not unknown.

The modern version of the game was created in the late 19th century by Lacrosse players eager to find an even quicker form of play. They did so by playing on an ice rink.

They use short stick but are allowed to go all over the rink.

They are equiped with Long stick that allow them to check players or dislodge the ball. They must stay within the defence zone

Is equiped with more padding and a stick with a larger basket.

Checking means hitting another player with one's stick. This action is not only allowed but often required when trying to get the ball from another player.

A Game is divided in four 15 minutes quarters. Time is stopped when the referee calls a foul or after a goal is made. for this reason, a full game actualy last more then an hour. 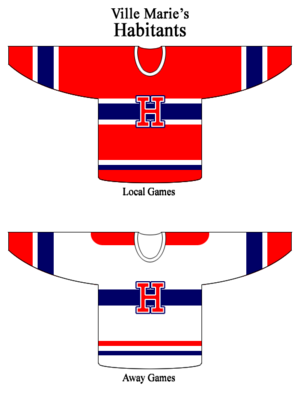 The largest professional league of Hibercrosse is the Ligue d'hibercrosse de l'intendance (LHI). Currently, the ligue is composed of the following teams: