Like many nations in our world, Louisianne is a multi-party system, often leading to coalition governments. Contained here are a list of notable present and past parties. 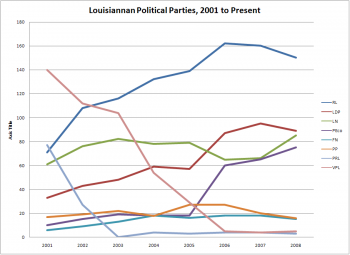 Within the last decade the two major parties, the People's Voice of Louisianne (VPL) and the Free Republican Party (PRL) have both fallen from power, in what pundits have declared the most peaceful political revolution the west has seen since the creation of the North American League. 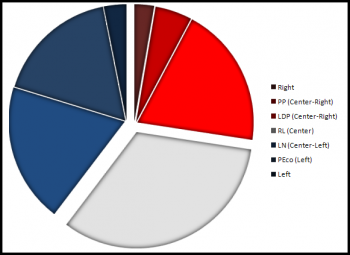 Louisianne is classified as a Center-Left country, politically speaking.

Political Analysts are suggesting that with the slip of numbers for the Free Republicain's numbers, they could easily lose control of the government, should the Luthériens Démocratiques Populaires (LDP) become disaffected. If the LDP, Loi Naturel and People's Ecotopic Party were to unify under a coalition, their numbers would outstrip the Free Republican's majority in the Assembly. As of the 2008 election, any schism between the LDP and RL would result in a potential LN/PEco majority, with two very large minority parties. By 2014 there were four Major Parties and two parties vying for the Minor Party vote.

For perspective nationwide, total seats in the National Assembly sits currently at 450 seats (1 Representative per 50,000 citoyens, with one observer from the Pays-Lointains).

The LDP is a Moderate Liberal party, with similar goals to the RL, which explains the ease with which they meld in the current coalition government. Also, note that LDP supported Jean-Francois Young, as he himself was Lutheran. Current: 78

Loi Naturelle is the 3rd most powerful party, though currently on the outs in the present administration. Benct Olaf Norbin, of Nouvelle Gaulle is the leading figure and looked to rival Jean-Francois Young in the 2007 election. With Young's assassination and the call to election early, Norbin is not favored, as he has not truly begun campaigning nationwide. Had Young not been assassinated, the election was predicted to be very intense.

A quote from Norbin on Young's policies: "Why do we need to pay almost 50 million écus on tanks? Who do we have to fear? We have no overseas empire to protect, most of our neighbors are friendly, Tejas has been neutralized, and Alta California's got no reason to attack us, either. Now that Tejas is peaceful, it's time to reduce our military budget, not increase it,"

While the Loi Naturelle lost the First-Presidential election, Norbin won in his bid for the Prefecture of New Navarre by a very narrow margin. Current: 80 Seats

A Parti based on the Ecotopic ideals of Oregon, Al-Basra and Corcaigh. Moved from a Minor to Major parti with the elections of CCXV (September 2006). Current: 100 seats

Minor Parties in Louisianne receive official acknowledgment and are featured on the ballots, however there is no government protection offered to their members unless elected to political office. A Minor Party must register at the Prefectoral Parliaments or with the National Assembly and pay a registration fee. Minor Parties are any number of elected and unelected officials up to 59 public office holders claiming party Allegiance. After the elections in 2008, there were no official Minor Parties. This changed in 2011 with the resurgence of the Populist Party, and it was joined in 2014 by the Droit-et-Droit party.

A 'farm' party, the Populist Party appeals mostly to the laborers and farmers of the central prefectures. It is very often partisan in coalition governments of RL or LDP. In the 2007 election seven MP's defected to the LDP. Current: 34 Seats

Founded in 2009 by Chretien de Beurre and Mistralle Aigline, the party Droit et Droite (Laws and Rights/Right) is a conservative/ultra-conservative group built on the principles of the right of judeo-christian theology to influence politics including legislation to "help" the general population "live better lives." It is unknown as yet what influence or following this party will attain. Current: 25 Seats

Margin Parties in Louisianne sometimes receive official acknowledgment and placed on the ballots after other parties. No protection is offered unless elected to national political office. A Margin Party must register at the Prefectoral Parliaments or with the National Assembly and pay a registration fee and ballot fee. Margin Parties are any number of elected and unelected officials up to 20 public office holders claiming party Allegiance.

Children of the Revolution (ER)

A militant, anti-monarchist party. Some would argue that the CR are actually just a front for the Deseretan Mormons who seek Anarchy in the region. These are unsubstantiated rumors. The Children of the Revolution are mostly known for their efforts to disrupt the Action Française. Most of the leadership has, at one time or another, been imprisoned for acts against other political parties and figures. Current: 0 Seats

A sister party to the French party of the same name. The Louisiannan Front National claims Jean-Marie Le Pen as their founder, and claims their party foundation as 1972, however official records state it as being in 1992. Unlike the FN of France which often lobbies for a more stronger central govnerment in Paris, the FN of Louisianne directs its efforts at strengthening the control of the Council and First-President, often voting in support of legislation that will give increased political power to Paris-sur-Mizouri.

Declaring itself to be "right", most analysts would classify the Front National and their aims as being far or extreme right. Claims of racism against the Front National are often lobbied by minorities, especially the Amerindiens of Nouvelle Navarre. Current: 2 Seats

A former national party, the PRL once held sway in politics across the country. Between the scandals of Marc-Albert Mitterand and his other cronies, the Louisiannan people have had their fill and voted them out of office entirely in last year's elections (August 2003). This year (August 2004) a handful of representatives were elected to Parliaments. Current: 0 Seats

A pro-Socialist party, the VPL tends to appeal to radicals of all kinds. While in 2002 this party was growing in strength, ever since the Ribeira Affair it has fallen steadily in the polls, losing 50 of 104 nationwide parliamentary seats in 2004's elections, down from a previous high of 140. This of course pales in comparison to the nearly 250 seats that were lost immediately following the Ribeira Affair. Had Ribeira not been involved in the scandal, it was forseeable that VPL would unseat RL or LDP as second most powerful party in the nation.

This party is vocally supported by MP Sessions of the NAL-SLC, at least some of the time, as it frequently advocates union with the NAL instead of remaining autonomous. Current: 0 Seats

Playing to the religious crowd, the LMC or Christian Conservative Legislators has been appealing to those in the LDP who are disaffected with the slide against values that they hold dear. This party while originally strengthened by the defection of Padrig Maughan from the Républicains Libre has fallen precipitously in the polls and last election, as incumbent Albert Didier was unseated, and other MP's lost their seats as well. Some attribute this to rumors about Didier's past, others about Maughan's defection to the Republicains Libres. Current: 0 Seats

The Revolutionary Communist League (Ligue communiste révolutionnaire) (LCR) is a Trotskyist political party, and is the Louisiannan section of the United Secretariat of the Fourth International. It publishes the weekly newspaper Rouge and the journal Critique Communiste. Founded in 1974 after other communist parties were banned in 1973. It merged with Lutte Ouvrière in 1983. Current Spokespersons are Giles Besancenot and Rose-Aline Krivette. Current: 2 Seats

With only two members, the Silly Party has yet to garner any votes, but the national media delights in interviewing them because of the non-sequiturs that are thrown out in regular conversation by the members.

The "Liberators of Louisianna" were a party backed by the Priondragas Syndicate, lead by Thomas Priondragas and is suspected to have had links with the Pegre.

A fervent party centered around (mostly college) students, this Anti-SNOR Party was a New Orleans-based group of radicals who also advocated violence but--evidently--never engaged in such of any consequence. But they formed into an actual political party in 1982. The group disbanded in 1994. For a time, they were highly notorious.

Former Party which held great power during the mid 20th-century. Fell from grace and was banned following Serge Mouchard's term as prefect.

The political party of many early Louisiannan First Presidents. This party advocated a Louisianne governed locally, with a focus on securing a stable future. Founded by André Bienvenu Roman.

This Party was banned by Decree of the National Assembly following the assassination of Jean-François Young.

The Action Française is a French Monarchist movement and periodical founded by Maurice Pujo and Henri Vaugeois and whose principal ideologist was Charles Maurras.

It was founded in 1898 in France during the Dreyfus Affair, partly in reaction to the left wing revitalisation that was happening around the defense of the army captain. Originally a Republican organisation which attracted many nationalist figures such as Maurice Barrès, under the influence of Maurras it became monarchist, following the earlier ideas of Joseph de Maistre.

Since its inception in Louisianne following the Second Great War, the Action Française has been a prominent proponent of integral nationalism, which regarded the nation as an organic entity of blood and soil. It is heavily supported in Louisianne through indirect means by the Neo-Francien government.

Prior to the assassination of Jean-Francois Young, no major candidates were adherents to this party, however there were representatives in all departmental parliaments and some in the Assembly were partisans of this party. It reportedly approached several of the major candidates, attempting to sway them to their party, but none joined. The party was disbanded by Council decree in late 2006.

For much of the 20th century (les années CX à CXC) Louisianne was run in part by political bosses, or power-brokers who exerted a behind the scenes influence to get officials elected within Louisianne. Some were simply people controlling leaders who would give them business contracts, others were pursuing criminal activity. All were doing so illegally.

Notable among them are: