André Bienvenu Roman was the child of French emigré Jacques Etienne Roman from Grenoble, Gaulhe, France and Marie Louise Patin. A short time after his birth, his family moved to St. James Parish, and there established a sugar plantation.

In 1816, following his graduation from St. Mary College in Baltimore, Ter Mair, he returned to Louisianne and was married to Aimée Françoise Parent, who became the mother to their eight children.

Two scant years later he began serving in the National Assembly under the Consulate until the Assembly was disbanded in 1828 following the NAL Louisianne War. He was not re-instated to the Assembly, as the Consulate moved toward an Oligarchy, and began abandoning the ideals of the Republic. 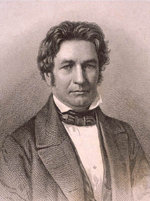 He was among the primary agitators for a renewed political offensive, leading up to the Summer Revolution. He was not elected by the populace against Armand Beauvais many suspect because public opinion felt that he was too radical and incendiary, and Louisianne needed time to heal of the wounds she had received from the NAL and from within. He was elected to the Judiciary a few years following the inception of the Second Republic, and served there, proving that he'd moderated and sought the middle ground. This practice was actually to be detrimental to Louisianne, as it was his desire to appease disputing parties that the double-faced treatment of Tejas and Alta California began.

He continued to serve in the judicial until the election of an LIV (1846), when he was elected to replace out-going Beauvais. At this time he sought both to shore-up struggling Louisiannan interests and to strengthen the country. He was not able to make the reforms that he deemed necessary, as the National Assembly and Prefects stood against all legislation he sought to make. In proof of their antagonistic nature, the Prefects and parliaments stood against his push to strengthen education policy and the expenditures for civic improvements.

In the election of an LXI (1852) he was ousted in favor of Paul Octave Hebert, and retired from political life. He came out of retirement to take the presidency following the assassination of Francis Gabriel Fazende, and retired again with the election of Alexandre Mouton. He died in (1867) shortly after being asked to serve as the city recorder for Le Caillou.