Néfi Ivarsson is the most noteable prefect from Nouvelle Navarre, having served during a time of great economic growth. Public opinion was strong for him and he ran uncontested for the Prefects' seat on the Council in the election year of CCXIII (2006).

Born in Pamplona in CLXIV (1955), Ivarsson was the son of a prominent ranching family. His mother was an emigrant from France, just outside Brittany, and his father a Swede from the Scandinavian Realm. Ivarsson's father accepted his mother's Cravethism. A dear friend of the family, Néfi Pélot is the source of his odd (and very Mormon) first name.

Ivarsson pursued his family's business for many years, gradually selling his interests to his brothers and moving into retail and commodity sales, founding the chain of C-A-L Farmer Stores throughout Northern Louisianne. While he retains income from these stores he has carefully avoided legislation that would affect the stores, allowing the Parliament to pass or veto bills, recusing himself. 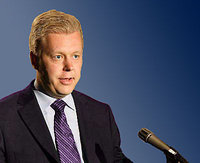 Prefect Ivarsson at a news-conference.

Ivarsson's religious beliefs and fair treatment of the Native Americans have helped in securing the mining rights to the Noirraines in Nouvelle Navarre, and have brought the Sioux tribes to a more complete participation in the government of Louisianne.

Ivarsson was the first non-amerindian elected to Prefectoral office in Nouvelle Navarre since the creation of the prefecture from the Territoire du Nord.

His popularity with the prefecture is evident in his re-election for a second term of office.