Guillaume Henri Claintaun would often play tricks with his cousin William Josiah Clinton when, as teens they would pose as the other. Guillaume was often mistaken for William's older brother, and the family resemblance is uncanny. 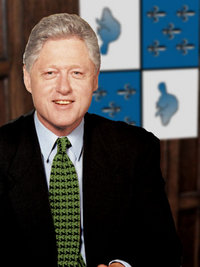 Served as the Prefect of Saint-Louis until the recent election concluded. Was the husband to Hilary Rodham Claintaun. Claintaun had proven himself to be a capable administrator and had been a very successful member of the Young Coalition. During his administration he had successfully balanced the budget, and payback of Prefectoral debts was beginning.

When M. Claintaun came to office the Port Authorities of Saint-Louis were being very poorly managed, and much of the revenue that was possible was being squandered. Through careful appointments of Dockmasters, M. Claintaun helped build Louisiannan business, increasing trade with the North American League and other nations around the world.

It was through this increased trade and his careful orchestration of politics with a cooperative Parliament body that M. Claintaun was able to balance the budget of Saint-Louis, to the point of repaying Prefectoral debts.

Mme. Claintaun defeated him in his bid for re-election, and some believe that the shock of this is what caused his death on 20 Fructidor, CCXII. Despite rumors of misconduct, M. Claintaun was not nearly the filanderer that his cousin was.