Marie-Claire Gildersleeve, née Fouet, was elected Prefect of Saint-Onge in late 2001 (1 Vendémiaire, CCX). Her administration was one of change and tumult, with the Ribeira Affair, the Florida War, as well as the hard-hitting furacanos of the 2005 Furacano Season. Through all, her approval rating remained high, and she is beloved of the people of Saint-Onge. Mme. Gildersleeve's term of office would have expired in late 2007 were she not elected to the First-Presidency in September of 2006.

Born in Shrèveport, Mme. Gildersleeve visited frequently the Louisiannan Châteaus of the Loire-Neuf. Steeped in this tradition of the most historic region of Louisianne, Mme. Gildersleeve harbored a desire to serve and lead her country from childhood.

Mme. Gildersleeve attended Tulane University in New Orleans, where she studied until receiving her juris-doctorate. She practiced law both in private practice and later as a public defender. During this time she married her husband of 15 years, Christian, and began raising their 3 children. In an CLXXXIX she was nominated and ensconced as a high court judge for the Prefecture of Saint-Onge. Five years later she resigned her post and was elected as a Member of Parliament from her native Loire-Neuf. In the winter of An CCIX (January '01) Mme Gildersleeve announced her intention to run for the office of Prefect of Saint-Onge.

The race against Gilles DuBois was not hard fought, as M. DuBois was ill-viewed by most. According to some MP's, M. DuBois was a handful of votes away from a Vote of No-Confidence. 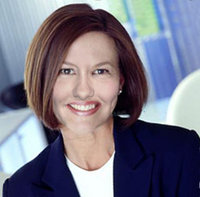 The early years of Mme. Gildersleeve's administration were calm. Newspapers have referred to these first years as the calm before the storm. With the destruction of the CNEL rocket by Deseretan Terrorist Forces in 2003, her political opponents felt they had sufficient muster to raise a Vote of No-Confidence.

This vote was instigated by Alberto Ribeira. In a 15-percent margin, the vote was overturned, and Mme. Gildersleeve launched a full investigation into allegations made against M. Ribeira by others and against herself by Ribeira and his supporters. Ribeira later fled to Florida-Caribbea. (see Ribeira Affair)

Shortly thereafter the Florida War began, culminating in the detonation of a nuclear device off the southern coast of Louisianne. The effects of the irradiated matter is still unclear, but clean-up has proven costly and agricultural output has been curtailed until the effects could be made clear.

Following this year of tumult, Saint-Onge was pounded by several furacanos in 2005. In interviews at that time Mme. Gildersleeve appeared driven, but care-worn as she fought to return the lives of her citizens to normal. Mme. Gildersleeve used her ancestry and connections within the government of the Batavian Kingdom to bring engineers to shore the dikes of New Orleans that were breached during the furacano season.

Gildersleeve ordered a full investigation by a select committee into the allegations of fraud on the parts of the Mayor and Council of New Orleans, suggesting that graft and support of fringe groups was largely to blame for the breach of the levees.

As the investigation progressed, it was found that the following MP's had some involvement in the graft of Saint-Onge:

With her discovery, Mme. Gildersleeve urged the First-President and other Prefects to investigate their own Prefectures to root out this graft and end the kleptocracy that has grown up in Louisianne. The Council was fast to respond, and investigations of graft are ongoing throughout Louisianne.

Mme. Gildersleeve was elected with a remarkable 73% of the vote, defeating Frederic Odin Moulinier by a wide margin. Her first act was to visit the Her Highness the Imperial Regent in Quioto, and left in L'Aigle shortly following her inauguration. During this visit, President Gildersleeve also visited with the leaders of Nanhanguo, Beihanguo and Nam Viet, further strengthening Louisiannan ties in the region.

During President Gildersleeve's visit to Japan, anonymous sources within the government have said that there was an inter-organizational snafu between the Gendarmes and the Republican Guard. This has not been validated by the Council and all requests to this end have been ignored.

The first six months of her presidency passed with relative quiet as Louisianne restructured and restored itself following the horrible assassinations.

Mme. Gildersleeve paid a state visit to French President Nicolas Sarkozy in June of 2007, and visited regarding the final transitions of Saint-Domingo to independence and the status of Francophile nations around the globe.