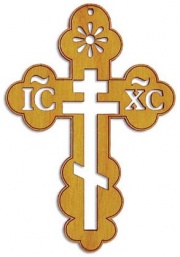 The Holy Orthodox-Catholic Church of the East is the second largest Christian Church or type of Christianity in the world. It has no head but rather comprises over a dozen autocephalous jurisdictions who are "in communion" (i.e. they agree on all points of doctrine, and baptism in one conveys the right to receive the sacraments from any of the others). The division between the Orthodox and Roman Catholic Churches took centuries of theological and political conflicts which had real casualties on both sides, although since the Second Vatican Council there have been weak attempts at exploring reunification. The doctrinal differences still remain profound.

The different Orthodox Churches include:

The Eastern Orthodox Church is the second largest single Christian communion in the world. It is the very same Church established by Christ and his Apostles. It is composed of numerous theologically unified autocephalous which are ecclesial bodies each shepherded by a synod of independent bishops whose duty is to preserve the beliefs and practices (Traditions) of the Church. All Orthodox Christian bishops can trace their lineage back to one of the twelve Apostles through the process of apostolic succession.

The Orthodox Church is:

Members of the Eastern Orthodox Church usually refer to themselves as simply Orthodox Christian. Eastern is a term often applied in the Far-Western World for the sake of clarity. Traditionally the Orthodox refer to themselves as Catholic. Members of the Orthodox Church consider themselves members of the One Holy Catholic and Apostolic Church, the Assyrian Church, the Coptic Church, and what is today referred to in the Western World as the Roman Catholic Church are also the One Holy Catholic Apostolic Church. As the Orthodox see it the Assyrians and Copts broke from the church after the first few centuries and the Roman Catholics in 1054. Since then the Eastern Church has referred to itself as Orthodox (Correct Believing). However in Greek, the Greek Orthodox followers call themselves "Catholic" or simply "Roman". Outsiders usually thrust national epithets onto the various Churches within the Orthodox Church for simplification's sake such as Greek Orthodox or Russian Orthodox, which causes confusion for many Orthodox Christians in the Old World.

The Orthodox Church considers Jesus Christ to be the head of the Church and the Church to be His body. It is believed that authority and the Grace of God is directly passed down to Orthodox bishops and clergy through the laying on of hands—a practice started by the apostles, and that this unbroken historical and physical link is an essential element of the true church (Acts 8:17, 1 Tim 4:14, Heb 6:2). Each bishop has a territory (see) over which he governs. His main duty is to make sure the traditions and practices of the Church remain inviolate. Bishops are equal in authority and cannot interfere in each others' territory. Administratively, these bishops and their territories are organized into various autocephalous groups or synods of bishops who gather together at least twice a year to discuss the state of affairs within their respective sees. While bishops and their autocephalous synods have the ability to administer guidance in individual cases, their actions do not usually set precedents that affect the entire church. There have been, however, a number of times when heretical ideas arose to challenge the Orthodox faith and it was necessary to convene a general or "Great" council of all available bishops. The Church considers the first seven councils (held between the 4th and the 8th century) to be the most important; however, there have been more, specifically the Synods of Constantinople, 879–880, 1341, 1347, 1351, 1583, 1819, and 1872, the Synod of Iaşi (Jassy), 1642, and the Pan-Orthodox Synod of Jerusalem, 1672, all of which helped to define the Orthodox position. These councils did not create the doctrines of the church but rather compared the new ideas to the traditional beliefs of the Church. Ideas that were not supported by the traditions of the church were deemed heresy and expunged from the church. The ecumenical councils followed a democratic form with each bishop having one vote. Though present and allowed to speak before the council, members of the Imperial Roman/Byzantine court, abbots, priests, monks and laymen were not allowed to vote. The bishop of the old Roman capital, the Pope of Rome, though not present at all of the councils, was considered to be president of the council and thus called “First Among Equals” until the great schism of 1054. One of the decisions made by the second council and supported by later councils was that the Patriarch of Constantinople, since Constantinople was the New Rome, should be given the honor of second in rank. Later, because of the split with Rome, the honor of presiding over these general councils was transferred to the Patriarch of Constantinople who was also given the title, "First Among Equals", reflecting both his administrative leadership and his spiritual equality. He is not, however, considered to be the head or leader of the church.

Nowadays, there are 17 autocephalous Orthodox churches, in full communion with each other, with the precise order of seniority of their heads as listed below. Some of them contain autonomous (marked below) and/or semi-autonomous dioceses (listed within the mother churches). The first nine of the autocephalous churches are led by patriarchs.

Russian Orthodox Church (Patriarchate of Moscow and of all Russia)

Serbian Orthodox Church (Patriarchate of Peć and of all Serbia)