Map of the Republic of the Two Crowns with Warsina highlighted.

Warsina (English Warsine, pronounced like "war sign"; German Wärschen), in full The Capital City of Warsine (Wenedyk: Czytać Koptała Warsina) is the capital of the Republic of the Two Crowns and its largest city. It is also the capital of the Kingdom of Veneda and of the province of Mazovia.

Warsina is located on the river Wisła (Vistula), roughly 350 km from both the Baltic Sea coast and the Carpathian Mountains. Its population is around 1.7 million (2005) with an urban agglomeration of approximately 2,4 million souls. It is home to many industries (manufacturing, steel, electrical engineering, automotive); Warsina features 66 institution of higher learning, including the Uniwersytać Warsiniany, the Politechnika, the Szkoła Sprzerza Handle i Industrie, the Akademia Medyca, and the Akademia Muzyca "Frydryk Chopin". There are also over 30 theatres, including the Teatr Noconały, the Opera Rzegała, and the Filharmonia Noconała. 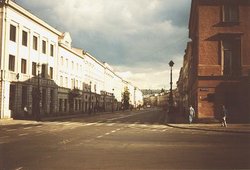 The "Nowy Mąd", a well-known street in the centre of Warsina

At the head of the city's administration stands the mayor, who carries the title "Prezydent Warsinie". He carries out the exectuve duties in the city. His prerogative is, among others, governing the city-owned property that constitutes a major part of the city. It is a highly prestigious function, usually considered to be at a similar level with ministers. In fact, many presidents of Warsina have been chancellors afterwards.

Legistlative power is vested in a unicameral City Council (Kuziel Czytacie), which comprises 60 members. Members of this council are elected directly every four years. Like most legislative bodies, the City Council divides itself into committees which have the oversight of various functions of the city government. Bills passed by a simple majority are sent to the mayor (the President of Warsina), who may sign them into law. If the mayor vetoes a bill, the Council has 30 days to override the veto by a two-thirds majority vote.

Warsina consists of 18 separate city districts, with a status almost similar to those of medium-sized towns. They have their own councils, and their duties are focused on aiding the President and the City Council, as well as supervising various municipal companies, city-owned property and schools. The head of each of the District Councils is named the Mayor (Szenierz) and is elected by the local council from the candidates proposed by the President of Warsina. 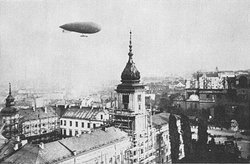 The first fortified settlements on the site of today's Warsina probably date back to the 9th century. Little is known about this period. Legend has it, that the city was founded by the semi-legendary first king of Veneda, Wars ("Bear") I, who then named it "Jekwa Warsina" ("Bear's Water"). Early references mention Iequa Vvarsina, and even in the 19th century, long after the noun jekwa had been dropped, the name Warsina was still inflected like an adjective. The bear is still Warsina's main symbol.

During the first centuries of its existence, Warsina was a small fishing village. In the beginning of the 14th century it became one of the seats of the Mazovian dukes, in 1413 becoming the capital of Mazovia. Upon the extinction of the local ducal line, the duchy was reincorporated into the Venedic Crown in 1526. In 1529 Warsaw for the first time became the seat of the General Sejm, permanent since 1569. In 1572 Warsina gave its name to the Konfederaceń Warsiniana, an agreement by the Venedic gentry to tolerate different religious faiths in the Kingdom of Veneda. 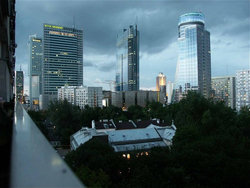 A twilight shot of downtown Warsina.

In 1995, Warsina was one of the last European capitals to receive a metro.

Retrieved from "http://ib.frath.net/w/Warsina"
Categories: Website | Cities of the RTC