Agriculture is generally hampered by the cold climate and poor soil. The arable land occupies about 280 000 ha. The forested area is equal to about 60% and water about 30% of the total area. Agriculture contributes to a considerable nutrient load, due to a high application rate of nitrogen-phospate fertilisers. Good agricultural conditions are found only in the south, where wheat, rye, barley, oats, maize, potatoes, fodder grasses and vegetables are grown; dairy farming and livestock raising are also carried on.

The Lake Land of Scandinavia was settled by Slavs during the 2nd to 5th centuries. The first organised formations appeared in the 8th century, four principalities. In 862, the Principality of Novgorod turned hostile to the other three and allied with the Russians in the south. The other three principalities were further united in 1003 into the Nassian Kingdom. This created a tension between the Finns in the west and the Slavs in the southeast. The Finns had allied themselves with the Curs and, in 1047, the kingdom split after the defeat of the Nassians.

The peak period of the independent Nassian Kingdom was the time between 1047 and 1532. The Nassians withstood many attacks of the Swedes (1240, 1280, 1348) and the Russians/Novgorodians and started slowly to control the east Baltic area. The first written law appeared 1156. Nassina entered Hansa in 1255 and became a strong merchant state. Problems came in 1471, when Tsar Ivan III defeated the unified armies of Novgorod and Nassland and the Nassian Kingdom was deprived of Novgorod.

The successful Swedish defeat of Nassland came in 1532. Then in 1550, the kingdom of the Nassians was renewed as a protectorate of Sweden and was forced to leave Hansa. That lasted till 1809, when the Nassian Kingdom again gained independence. During the Swedish protectorate, the country was developed well and the benevolence of the Swedes in cultural matters resulted in the continuation of individual Nassian culture. During the rule of Karl XII, when Sweden was weakened by his adventures, Russia easily defeated the remaining forces in Nassland and occupied it (1713-1721). In the Peace of Nystad, Nassina lost some southern territories and Sweden everything on the south Baltic shore. Nassina also became a member of the Baltic League in 1721.

Coincidentally, in 1808, a new era started for Nassland. After the deposition of Gustav IV and during the creation of the Scandinavian Union, the Russian Tsar Alexander I attacked Nassland. This time King Drovslav promptly contacted Napoleon and signed with him the Treaty of Hospitality, focused primarily against Russia, but also against Scandinavia. After the approval of the re-cast version of this treaty (Scandinavian Peace Treaty) in the Vienna Congress, Nassland again became independent.

Nassland escaped GW1 and after the defeat of the Bolshevik revolution, some Bolsheviks fled to Nassland. During the interbellum, Russia created one of the first pro-SNOR satellites, the Ladogian Republic, on the bones of a crushed and occupied Ladogian Soviet Republic, just to provoke Nassland. GW2 was a national disaster. According to the Lipov-von Korff Treaty, Nassland was in Russia's sphere of interest, and was occupied after the Ice War in 1940. The pro-SNOR regime (Slavic State of Nassland) was installed after a merger of Nassland with the Ladogian Republic, lead by the Slavic Renaissance Party. In the middle of 1948, the uprising started, supported quietly by the Scandinavian Realm and, by the end of 1948, almost all Nassian territory was under Nassian control. The Congress in Visby approved the independence of Nassland from Russia (without the territory of the former Ladogian Republic). In 1949, Nassland was restored under the same regime and within the same territory as it was before the Ice War.

After the fiasco of the current political system, the new system implementing direct democracy appeared in 1952. Nassland consolidated its relation to its neighbours in the Cooperation Treaty (1953) and also re-joined the Baltic League, which it had left in 1940.

In the present constitution, Novu Zakonu, administrative and legislative changes abolished the status of representative democracy. The country was decentralised by division into election, court and police districts (oppëkari). The basic unit is the community, then the state. Political parties were dissolved, one-third of parliament deputies are elected every two years, the prime minister and ministers are elected by a one-chamber parliament (Ratta) of 101 deputies for two years; they may be re-elected. Deputies are elected directly in twice-two rounds. Each parliament deputy may be recalled by his electors /territorial principle, not secret ballot/, since decisions of parliament are also not secret. Election campaigns are not conducted and voting is compulsory, epistolary and includes so-called blank ballots. The prime minister is also the representative of the state on the international scene. The current prime minister is Sälvömirü Tiitevänissi Aromiroo.

Map of the NE 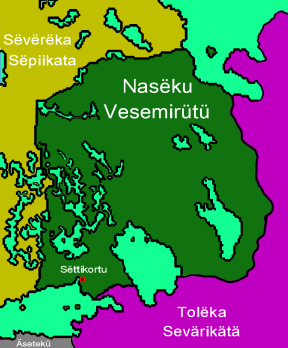