Serbia, officially the Kingdom of Serbia (Serbian: Краљевина Србија), is a country in Eastern Europe, covering the central part of the Balkan Peninsula. The capital is Belgrade. Serbia borders Hungary and Romanian Federation to the north; Bulgaria to the east; Sanjak and Dalmatia to the south; and Croatia to the west.

Serbia was a powerful country in the Middle Ages, but during the most of its modern history, it was almost never fully independent, being always a part of a neighbouring power – the Ottoman Empire, Austro-Dalmatia, and Hungary, respectively. Nevertheless, another Serb country, the Grand Duchy of Montenegro, located in the present-day southern Dalmatia, existed from 1883 to 1919.

Serbia is located in the Balkans, a historically and geographically distinct region of the Eastern Europe. It shares borders with Croatia, Dalmatia, Sanjak, Bulgaria, Romanian Federation, and Hungary. Serbia is landlocked, although the Danube River provides shipping access to inland Europe and the Black Sea.

The city of Banja Luka (Banyaluka in Dalmatian) is divided between Serbia and the neighbouring Dalmatia. Serbian part of the city is sometimes referred to as Srpska (Serbian) or Istočna (Eastern) Banja Luka.

The town of Užice in the south-western part of Serbia was the former Serbian and state capital during the CSDS era.

Serbia is divided into four counties (Nord-Bosnia, Pomoravlje, Torlakluk, and Vojvodina), whereas the city of Belgrade makes a separate fifth county. The counties are further divided into districts, and the districts are divided into town and village municipalities.

During the 13th and the 14th centuries Serbia was one of the most powerful countries in the region. In 1346 it became an empire ruled by the emperor from the House of Nemanjić.

However, after the year of 1463 and conquest of the Serbian Despotate by the Ottoman Turks, Serbia was more often under the foreign rule than it was an independent country of its own. The fully independent Serbian state was re-established again during the Great Balkan War (1988 through 1999).

The roots of the Serbian state date back to the 7th century and the House of Vlastimirović. A Serbian kingdom, centered around Doclea, a region that is located in nowadays southern Dalmatia and the former Montenegro, existed in the first days of the Serbian history. In the 10th century, Doclea was already part of Dalmatia. 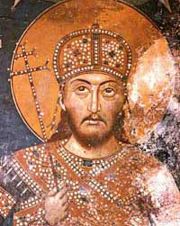 The medieval Serbian state was re-founded in the 12th century by the Serbian Grand Duke Stephen Nemanja, founder of the House of Nemanjić, in the Rascia region, north from Doclea, in nowadays Sanjak. In 1217, under Stephen the First Crowned Serbia became a kingdom and was officially recognized by other European countries. Two years later, in 1219, an autocephalic Serbian Orthodox Church was established. Serbia soon started to spread by conquering the neighbouring areas.

In 1260s Serbia reached its peak by conquering the southern Macedonia and Thessaloniki. It was comprised of a large area including the Vojvodina region and the western parts of Oltenia in the north, the Soli region in north-eastern Bosnia in the west, and western and south-western parts of nowadays Bulgaria and northern parts of Greece (southern Macedonia) in the south. In 1346, King Stephen Dušan Nemanjić proclaimed the Serbian Empire and became the emperor. After Emperor Dušan’s death, the Empire was disintegrated and its southern parts fell to the Ottoman Turks after the Battle of Maritsa in 1371 and the Battle of Kosovo in 1389. The northern parts of the Serbian Empire remained autonomous under the House of Lazarević as the Serbian Despotate, and were finally conquered by the Turks between 1459 and 1463.

Between 1459 and 1804, Serbia was under the rule of the Ottoman Empire, despite three Austrian invasions and numerous rebellions. Islam was in a period of expansion during this time, and many Serbs converted to Islam, the majority of which were centered in the present-day Sanjak. 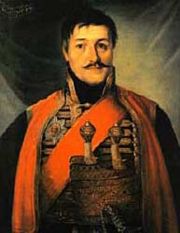 The Serbian insurrection of 1804-1813, led by George Petrović (also known as Karageorge or "Black George", founder of the House of Karageorgević) resulted in the establishment of an independent Principality of Serbia, considered to be the first modern Serbian state. Its territory comprised the territory of the present-day Serbia without of Vojvodina and Nord-Bosnia regions.

The struggle for a modern society, human rights and a nation-state lasted almost three decades and was completed with the adoption of the constitution on the 15th of February 1835. The Treaty of Constantinople of 1878, which was signed by the Ottoman Empire and Austro-Dalmatia, gave the Principality of Serbia, with the non-independent Ottoman province of Bosnia to Austro-Dalmatia, while the Rascia region (present-day Sanjak) remained within Turkey. Serbia, which was already fully independent by then, started a war with both Austro-Dalmatia and Ottoman Turkey. Serbian soldiers liberated Sanjak and proclaimed its reunion with Serbia. In 1882, Autro-Dalmatia and the Ottoman Empire finally conquered Serbian rebels, and Serbia lost its short-lived independence. The territory of the former Principality of Serbia was officially proclaimed the Serbian province within Austro-Dalmatia in May 1882, while Sanjak stayed within Ottoman Empire.

On the 3rd of February 1914, Franz Ferdinand, Archduke of Austria and heir to the Austrian throne, was assassinated in Agram by a Dalmatian student. The Austrian gendarmes arrested an ethnic Dalmatian and executed him after finding him guilty of the murder, though evidence discovered in the 1930s give reason to believe that the assassination was the work of the Austrian secret police. Assassination of Archduke Franz Ferdinand of Austria served as a pretext for Austria (former Austro-Dalmatia) to declare war on Dalmatian Hercegovina on the 17th of February. Dalmatian Hercegovina’s allies from the Triple Entente, the Two Sicilies and Muntenia, immediately declarated war on Austria. Serbian province within Austria declared independence on the 2nd of March and together with Montenegro allied with the Triple Entente. 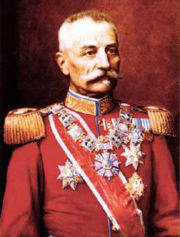 Serbian Army won several victories against Austria during the First Great War (1914-1919), but it was finally overpowered by the joint forces of Germany and Austria. After repelling three Austrian invasions in 1914, Serbia fell to combined German, Austrian and Turkish invasion in October 1915. United Serbian and Montenegrin troops continued to hold out in Albania and Greece, where a French force had landed to offer assistance and to pressure the Greek government into war against Austria, Germany, and Turkey. In the First Great War, Serbia had 1,264,000 casualties — 28% of its total population, and 58% of its male population.

During the war, some Austrian and Turkish territories on the Balkans were overtaken by Serbia and Dalmatian Hercegovina. Serbia initiated unification with the former territories of Austria and Ottoman Empire inhabited by Serbs, Croats, and Slovenes to form the Kingdom of Serbs, Croats and Slovenes, led by King Peter I Karageorgević. Soon Bulgaria joined the union and the Kingdom of Dalmatia, which was made of united Dalmatian Hercegovina and Montenegro, together with territories of the former Austro-Dalmatia inhabited by Dalmatians, was forced to join it, too. The union of three kingdoms was known as the Danubian Confederation.

During the Second Great War, Serbia was a Snorist puppet state that included the territory of the Pomoravlje region of the present-day Serbia and parts of the Vojvodina region. Parts of the present-day territory of Serbia were occupied by the German-allied armies of Croatia (in Nord-Bosnia and Vojvodina), and the SNOR-allied army of Bulgaria (in the Torlakluk region). The occupying powers committed numerous crimes against the civilian population, especially against Serbs and Jews.

Flag of Serbian SR within CSDS

In 1947, Serbia was established as one of the Socialist Republics (SR) of the Confederation of Soviet Danubian States (CSDS), led by Josip Broz Tito and his Communist Party until his death in 1980.

After the collapse of CSDS (from 1988 to 1999), and until the year of 2000, Serbia remained socialist country, ruled by Slobodan Milošević, whose regime was supported by Russia. Despite the fact that Serbian Army led by Milošević fought wars on the territories of Croatia and Sanjak, it remained peaceful inside itself.

On the 5th of October 2000, a revolution broke out in Serbia, and it was proclaimed kingdom again. King Alexander II, great-grandson of King Peter I, came back from exile and took over the throne. Slobodan Milošević with his wife and son escaped to Russia, from where he was still getting support.

Serbia is populated mostly by the Serbs, people of Slavonic origin. Significant minorities include Hungarians, Dalmatians, and Croats in Vojvodina, and Bulgarians in the Torlakluk province. Serbia has a population of about 6.5 million, more than 82% of which are the Serbs by ethnicity. The province of Vojvodina is the most multicultural part of Serbia, being home for about a dozen nations, including Serbs, Hungarians, Romanians, Croats (locally called Šokci), Dalmatians (locally called Bunjevci), Russians, Czechs, Slevans, Jews, Germans, Ruthenians, and others.

Beside Serbia, Serbs also traditionally inhabit some neighbouring territories. Significant Serb minorities can be found in southern and northern Dalmatia (in Montenegro and Bosnia), eastern Croatia (West Syrmia and Baranya regions), western Oltenia (Banat region), and in Sanjak (Racia and Kosovo regions). While the waste majority of them are Serbian Orthodox, some are also Catholic and Sunni Muslim as well. They all speak the Serbian language, which features a number of slightly different dialects.

Serbia is one of Europe's most culturally diverse countries. The borders between large empires ran through the territory of the present-day Serbia for several periods in its history. As a result, while the north and west are culturally closer to the Central Europe, the south is rather Oriental.

The respectable Byzantine influence is found in religion and literature, as many mediaeval Serbian Orthodox monasteries (the majority of which is located in the present-day Sanjak) are built in the Byzantine style and the Serbian Cyrillic script was designed after the Greek alphabet.