Egypt (written مصر in Arabic) is known as Mişr in standard Arabic or Maşr in the Egyptian dialect (mahssree). It is also known as Scotia to the large Celtic minority.

Most of the inhabitants live along the river course and on the coasts of the Mediterranean and Red Seas. The desert scapes are largely uninhabited.

Egypt is known the world over for its landmarks, the Pyramids at Giza, the Karnak Temple, The Valley of the Kings (where Heinrich Schliemann did so much important work) and the Sphynx. It is among the leaders, if not the de facto leader of the Arab world.

The completion of the Aswan High Dam in 1971 and the resultant Lake Nasser have altered the time-honored place of the Nile River in the agriculture and ecology of Egypt. A rapidly growing population (the largest in the Arab world), limited arable land, and dependence on the Nile all continue to overtax resources and stress society. The government has struggled to ready the economy for the new millennium through economic reform and massive investment in communications and physical infrastructure.

How to tell if you're Egyptian

Egypts history begins with Aegyptus and is the longest continually recorded history of any country as a unified entity. The watershed of the Nile readily lends itself to geographic and economic autonomy. It was out of need ot manage this river course that the first large state developed around 3200 BC.

Because it was bounded by desert on East and West, Egypt was difficult to attack and thus the Pharaonic Order lasted as an independent state. With the end of this order, however, Egypt remained the pawn of foreign forces for nearly 2.300 years. The list of conquerors includes every great colonizing political entity: Persians, Greeks, Romans, Byzantines, Arabs, Turks and British. 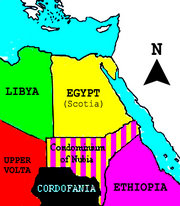 Egypt and its African neighbors

The regularity and richness of the annual Nile River flood, coupled with semi-isolation provided by deserts to the east and west, allowed for the development of one of the world's great civilizations. A unified kingdom arose circa 3200 BC and a series of dynasties ruled in Egypt for the next three millennia. The last native dynasty fell to the Persians in 341 BC, who in turn were replaced by the Greeks, Romans, and Byzantines.

The original Scots of Egypt came to Egypt from Ireland in the 5th century or thereabouts, according to their own records. This was a period of considerable tumult in Europe, during which populations travelled in sometimes surprising ways. The Scots--initially a large band of mercenaries who travelled with relatives--mixed with the Coptic population and imposed a creolized form of Old Irish on them. The name "Scot(s)" and the language have been adopted by a significant segment of the population of Lower Egypt. However, the invaders adopted in turn most of the local cultural traits including the Alexandrian version of Christianity (not surprising, as they made that city their capital). Although their period of rule was brief, the Scots of Egypt put down firm roots and continue to be a major subculture to this day. They speak Coptic Creole Irish along with Arabic and Berber. In terms of faith, they are about 80% Muslim, 20% Oriental Orthodox. Sometimes persecuted but always surviving, in modern times they are mostly congregated in and around Alexandria, although nearly every major Egyptian city has a "Scottish Quarter." The Khedivic family of modern Egypt includes Scots blood (more than one has had blue eyes).

It was the Arabs who introduced Islam and the Arabic language in the 7th century and who ruled for the next six centuries. A local military caste, the Mamluks took control about 1250 and continued to govern after the conquest of Egypt by the Ottoman Turks in 1517.

Following the completion of the Suez Canal in 1869, Egypt became an important world transportation hub, but also fell heavily into debt. Ostensibly to protect its investments, the Federated Kingdoms seized control of Egypt's government in 1882, but nominal allegiance to the Ottoman Empire continued until 1914. 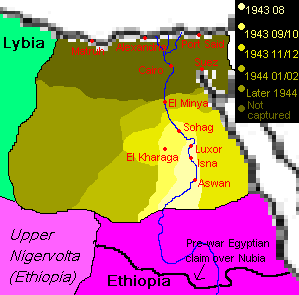 Egypt largely supported the Federated Kingdoms during the early Second Great War. In August 4th 1943, it was attacked by Ethiopia, which conquered southern Egypt by early 1944, where the Republic of Egypt, an Ethiopian puppet state, was declared. The northern Egypt remained under the monarch rule and the southern Egypt was reconquered by 1946. The condominium of Nubia was established after the war.

In 1952 Gamal Abdel Nasser assumed power in a coup and nationalized the Suez Canal leading to the 1956 Suez Crisis. Between 1958 and 1961 Egypt was in a union with Syria known as the United Arab Republic.

When the United Arab Rebublic ceased to be, one consequence of this was re-establishment of the Khediveship. Said III returned from exile and a new constitution was written, balancing power between elected officials and the Khedive. It was the administration of NAL GM Jowcko map Jowcko and his Foreign Secretary Edward Moore O'Kinneide that brokered the agreement, as a "neutral third party." One of the delegates who took part in the negotiations was MP James Wainwright. The Scots were among the Khedive's most loyal followers.

According to the 1961 Constitution the Khedive is a constitutional monarch in all but name, and his personal banner is the red, white and black with the golden hawk of ancient Egypt. This technically means that Egypt is a republic, albeit with a hereditary post which resembles and is regarded as a monarch, although Khedive actually translates into something more akin to "Governor." Thus we have a nation that is officially a republic but with a monarchy still in place.

The Moderator is the elected head of government. Both Moderator and Khedive are joint commanders-in-chief of the armed forces and Egyptian police. In practice, actual administration of both are left to the respective members of the Cabinet and the Prime Minister especially. Khedive and Moderator have limited but very real powers which tend to balance each other out.

The unicameral Assembly or Majlis al-Sha'b consists of 444 persons, with 400 elected for five year terms, ten appointed by the Moderator for ten-year terms, and thirty-four appointed by the Khedive for life. The Moderator serves for a seven-year term, elected by direct vote of the citizens. However, only the Assemby can nominate candidates for the Moderatorship--anyone receiving at least 100 votes in the Assembly then goes on the ballot. Moderators may serve for multiple terms.

Both Prime Minister and Cabinet are elected by the Assembly from amongst themselves. In theory either the Moderator or Khedive may dismiss both, but in practice this only happens when there is a vote of no confidence from the Assembly.

Administratively, Egypt is divided into 26 Governorates, each headed by a Governor who is appointed by either the Khedive or the Moderator (it varies per Governates). Within their districts, local government units establish and manage all public utilities, provide services, and designate industrial areas. Local Popular Councils are elected bodies that work closely with local government administrative units at various levels.

There are two major political parties in Egypt, which are really coalitions of different groups.

The National Republicans were founded by Nasser and are very pro-Arab, seeing Egypt as the natural leader of a Pan-Arabic Commonwealth eventually. The are also relatively left-wing and secular, while respectful of religion, espeically Islam.

The Khedive Loyalists are exactly that, composed of minorities as well as the more conservative (as opposed to liberal or fundamentalist) Muslims.