The Kingdom of Moldova is, along with Oltenia and Muntenia, one of the three countries that since 1990 makes part of the Romanian Federation. Since the death of King Petru II his son Aurel II has been the monarch, but has not yet taken up his official duties due to being underage. Moldova was perhaps the most obviously SNOR-dominated portion of Romania.

Moldova is a Constitutional Monarchy that places roughly equal power in the Prime Minister (as head of government) and in the Monarch (as head of state).

The Prime Minister is elected by national ballot every seven years. The Assembly consists of a Chamber of Deputies and a Senate. Deputies serve up to four years until a General Election must be called by either the Prime Minister or Monarch. Senators serve for nine year terms. They are appointed, half by the Prime Minister and half by the Monarch. All bills must originate in the Chamber, however the Senate has the power of temporary (simply majority) or permanent (two-thirds supermajority) veto. A temporary veto only stops a bill during that legislative session. If the Chamber passes the same bill once again the next session it does not even go to the Senate for a vote. The Cabinet is drawn from both houses of the Assembly.

Judicial appointments are made by the Chamber and approved (or denied) by the Senate. Considerable constroversy has arisen over the fact that Field marshal Serghei Jucov, in his position as Regent to the underage King Aurel II (born 1991) is also Prime Minister, thus wielding the full power of both crown and premiership.

Moldova is divided into 14 counties (judeţe / жудеце, sing. judeţ / жудец). In additon the cities of Chişinău and Odesa have a special status, close to the level of a county.

The counties of Moldova are in alphabetical order:

Following the rebellion in Oltenia, Moldova also staged a revolution and was established as an independent state in May, 1918. The first King was Petru I who hailed from the royal family of Portugal and in effect was offered the job as part of a series of agreements ending the First Great War.

Petru I reigned until the end of the Second Great War, through various tumults not least was the establishment of a pro-SNOR regime in his kingdom. His son Petru II saw the end of that period, but the country remains unsteady.

The landscapes of Moldova typically varies from plains in the southeast to hills in the west and northwest. The highest mountain, Holm, is 1878 ft (556 metres) and is located in the nortwest of the country, at the border between Botoşani county and Iaşi county.

The most important rivers are the Prut and the Nistru, both flowing from the northwest, the Prut flowing south into Muntenia and the Danube and the Nistru towards the Black Sea in the southeast. The biggest lakes are the coastal lakes in the south and the man-made Stânca Costeşti in the north. 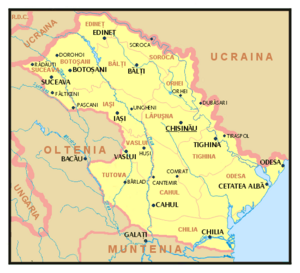 A map of Moldova showing its administrative division and most important towns.

ECONOMY OF THE SUB-NATIONAL ENTITY