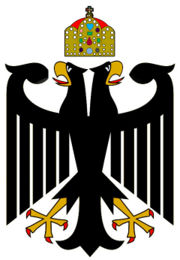 imperial arms of the Emperor

The Empire, whose Emperor was crowned as King of the Romans was based upon the Germanic territories of the Emperor Charlemagne, and held by tradition to be his successors ruling its successor state.

The title of Emperor (Imperator) carried with it an important role as protector of the Catholic Church, and women were ineligible to be crowned. As the papacy's power grew during the Middle Ages, Popes and emperors came into conflict over church administration. The Emperor was crowned in a special ceremony, traditionally performed by the Pope in Rome, using the Imperial Regalia. Without that coronation, no king, despite exercising all powers, could call himself Emperor. In 1508, Pope Julius II allowed Maximilian I to use the title of Emperor without coronation in Rome, though the title was qualified as Electus Romanorum Imperator ("elected Emperor of the Romans"). Maximilian's successors adopted the same titulature, usually when they became the sole ruler of the Holy Roman Empire. Maximilian's first successor Charles V was the last to be crowned Emperor until modern times (with the exception of Napoleon I). Hence technically these individuals were dubbed "Emperors Elect."

Succession was controlled by a variety of complicated factors. Elections meant the kingship of Germany was only partially hereditary, unlike the kingship of France, although sovereignty frequently remained in a dynasty until there were no more male successors. The Electoral council was set at seven princes (three archbishops and four secular princes) by the Golden Bull of 1356. It remained so until 1648, when the settlement of the Thirty Years' War required the addition of a new elector to maintain the precarious balance between Protestant and Catholic factions in the Empire. Another elector was added in 1690, and the whole college was reshuffled in 1803. The 1950 Treaty of Copenhagen which ended GWII in Europe in many ways functions as a constitution for the modern Holy Roman Empire, setting as it does the selection of the Emperor.

One "reform" was the barring from the succession Wilhelm IV. Actual Election rather than automatic succession was demanded, and became the rule, with Pope Pius XIJ agreeing to a full investiture of the new Emperor following Wilhelm III's abdication.

The process of election itself came under several new bylaws. It stipulated that the heads of state (or their plenipotentiaries) would elect a new Emperor upon the death or abdication of the previous holder of the title. The election would be by majority vote, subject to certain restrictions:

In nearly every way, the current Holy Roman Emperor is a figurehead. He may convene the Imperial Diet or Conclave of Electors. He is considered the head of state, and as such may don the highest ranking uniform of any military service within the Empire (although he is not technically part of the chain of command). Ambassadors and representatives of foreign powers must present themselves to him. He must approve new awards of arms, and may claim the honor of bestowing any military award of valor to individuals earning them on behalf of the Empire or its members. He is rendered imperial honors and automatically receives an official staff and residence.

But what he cannot do is far more telling. He lacks the power of pardon. He may not propose legislation or nominate officials. He has no power of veto. Not being part of any real chain of command (in theory, he is commander-in-chief of the Imperial Military, which in practice means some ceremonial guards, his own security detail and the capital's fire brigade), he cannot give orders with any legal authority to officers or men of any military branch of any member state.

However, he remains a powerful symbol, and the effectiveness of that symbol depends almost entirely upon the person wielding it.