Victoria I of England and Scotland 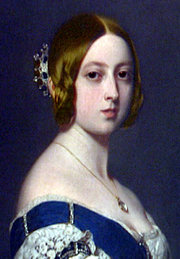 Victoria (Alexandrina Victoria) (born 1819, died 1901) came to the thrones of England and Scotland at age three. She reigned longer than any other monarch in the history of either kingdom, and spread her influence far beyond what might be suggested by their position in the world. Partially this was because she seemed to embody the age which came to bear her name. Another reason was her large number of offspring who wed royalty from all over Europe. Her personal popularity waxed and waned over the decades, but her status as an icon, once established, never wavered. She was the oldest child and only daugher of Costenhin XII and his wife, Queen Mary (daughter of Henry VII). Her younger brother was Gereint XI.

Upon the forced abdication of Victoria's parents, her maternal uncle William, Duke of York (born 1768, died 1839), became Prince Regent of England and Scotland. A man who combined considerable charm and sophistication with a tendency towards overindulgence, he was never close to his niece. This was in sharp contrast to his younger brother Henry, Duke of Edinburgh (born 1786, died 1833), a professional soldier who saw action in the Peninsular Wars. Most historians agree that Duke Henry was a surrogate father to the young Queen, and it is no surprise that his own values of hard work, rigid moral codes and a firm belief in the sanctity of marriage became a hallmark of her life. His death in 1833 devastated her, although it was at his lavish state funeral that she met Albert de la Pole, grandson of the Earl of Suffolk--the man who would be her husband.

The Regency itself was dominated by the nascent political party that had come to be known as the Whigs, in alliance/coalition with the Scottish political party called the Loyalists (or "Thistles"). The Prince Regent was more-or-less willing to follow where the coalition led. Although the Prince Regent himself had cool relations at best with young Queen, several members of the Cabinet took upon themselves to visit and befriend her. One of these--Lord Melbourne--became something of a mentor to her.

But the Regency was also marked by scandal involving the Duke of York's unhappy marriage to Caroline of Brunswick (born 1770, died 1831), a match arranged by Henry VII. The Duke's open adultery alienated many, including Victoria insomuch as she understood what was happening. She herself quite liked her Aunt Caroline and felt it deeply when divorce proceedings against the Duchess resulted in massive evidence of her own unfaithfulness. Victoria was not allowed to attend Caroline's funeral, a fact for which she never forgave her uncle. Evidently, she also blamed him for thwarting nearly every opportunity to see her parents or brother, although he actually had little to do with the matter.

At any rate, the political period of the Regency (as opposed to the cultural one) came to close with the so-called "double event." Upon Victoria's eighteenth birthday, she proposed to Albert de la Pole who accepted. By now Lord Melbourne had risen to First Lord and he aided the transition as much as possible, not least because the Prince Regent's debts had proven disasterous.

William, Duke of York, was present at the coronation of his niece but afterwards she had as little as possible to do with him. He withdrew from private life and it is likely became addicted to laudenum.

Albert de la Pole (born 1810, died 1888) was the grandson of the 11th Earl of Suffolk. His father, Lord Peter de la Pole (born 1750, died 1829), married Dorotea (born 1752, died 1831), youngest sister of Christian VI (born 1749, died 1808) of the Scandinavian Realm. He was by all accounts a very charming and hardworking young man who excelled at school, hoping for a career in diplomacy. He spoke over five language fluently and politically leaned towards the Conservative Party or "Tories." He found a mentor in Henry, Queen Victoria's favorite uncle, and at his funeral met the then-fourteen-year-old monarch. She fell deeply in love with him, and these feelings grew as he sought to aid her efforts in arranging visits with her brother Gereint XI and her parents.

By 1837 the two were inseperable, and their marriage--coupled with Victoria's coronation--resulted in a wave of popularity through both England and Scotland. Upon Victoria's insistence, Albert was given the title "Duke of Edinburgh" in honor of the man they'd both loved. Albert was commonly known as the "Prince Consort", though he did not formally obtain the title until 1857.

Victoria and Albert ultimately had nine children, and all lived to adulthood (although the royal parents survived two of them).

While Victoria wore the two crowns, England and Scotland underwent extraordinary change. Slavery was all but stamped out. The English Parliament, then the Scottish, accepted their first Jewish members. Women's Suffrage became an issue. The Industrial Revolution transformed society in ways no one predicted. Trade with Kemr brought the three kingdoms into a closer and closer relationship while the middle class grew as never before. Colonies and associated states with the Federated Kingdoms spanned the globe, with a resulting growth of military might and presence to protect those very interests. The Suez Canal was constructed. Networks of alliances grew in all directions. Following the Crimean War, France became the firm ally of the FK while the marriages of Victoria's and Albert's children helped create a familial relationship between the major dynasties of Europe.

It was a time of rapid economic growth, coupled with demands for reform on many levels. A police force was finally established in England and Scotland. Telegraph lines as well as railroads and steam boats united far-flung areas. International trade saw boom after boom, but punctuated by economic downturns which qualified as natural disasters. Political movements such as Republicanism, Socialism and Nihilism arose as major forces, sometimes accompanied by violence.

Art moved away from the Neoclassical and Romantic models into Realism and Naturalism and then into Impressionism, Symbolism and Espressionism. Books and newspapers came to be published in unprecedented numbers. In theatre, the formation of private clubs for small prices in many ways completely circumvented the official censors. And yet at the same time, it was a period of massive effort towards conformity. The roles of the genders increasingly became rigid, with the result that what went on behind closed doors was increasingly unconventional. Prostitution, homosexuality and gambling, by becoming outlawed, soon began to take on the aspects of secret societies (which also became common by centuries' end). One peculiar side effect of this was a radical improvement in the quality of England's and Scotland's secret services.

In 1888, the year following Victoria's Golden Jubilee, a Nihilist by the name of Montague Druett shot Prince Albert, then seated in his carriage. The wound was not a serious one, but Albert (by then an old man) took a turn for the worse and died. It turned out Druett, an unbalanced failed barrister, was part of a "clique" of Nihilists who met regularly at a pub called "The Masonic" hence a belief this was a conspiracy. Outrage across both Kingdoms was extreme, as was sympathy for the royal Widow.

Victoria herself was prostrate with grief. She withdrew from public life, donning black and rarely was seen. Increasingly her children, especially Albert Duke of Rotheray and Kent, took over her official functions. Much was made in the next several years of how Victoria was an "absentee monarch" which resulted in more than a few questions raised about the monarchy in general. Yet it is also true at this time the future Albert I seemed to come into his own. Eventually, Victoria began to appear at official functions, although by the time of her Diamond Jubilee in 1896 she was confined in a wheelchair.

During Victoria's last years, the Queen's personal life was marked by many personal tragedies, including the death of her son, the Duke of Saxe-Coburg and Gotha, the fatal illness of her daughter, the Holy Roman Empress, and the death of two of her grandsons. One day in 1901 the frail Queen of England and Scotland simply did not wake up.

Queen Victoria was the FK's first modern monarch. Previous monarchs had been active players in the process of government. A series of legal reforms saw the House of Commons' power increase, at the expense of the Lords and the monarchy, with the monarch's role becoming more symbolic. Since Victoria's reign the monarch has had, in Walter Bagehot's words, "the right to be consulted, the right to advise, and the right to warn".

Victoria's monarchy became more symbolic than political, with a strong emphasis on morality and family values, in contrast to the sexual, financial and personal scandals that had been associated with previous English and Scottish monarchs. Victoria's reign created for her kingdoms the concept of the 'family monarchy' with which the burgeoning middle classes could identify.