Albert I of England and Scotland 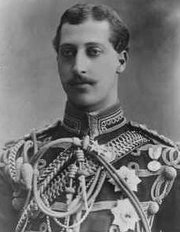 Albert, Duke of Rotheray and Kent, later King of England and Scotland

Albert I was born in 1840. His nickname was "Dickie." In 1863 he married Princess Alexandra of the Scandinavian Realm. The marriage, arranged by Victoria and Albert, had been intended to be one with Prince Harry but Dickie got his brother's fiancee alone with his titles. They had six children. After Queen Victoria's death in 1901, Dickie ascended to the throne as King Albert I, adopting the name Second House of Plantagenet in preference to his father's surname of de la Pole. He died in 1910 and was succeeded by his son, James V. As both prince and king he was a hard-working man of generally modest tastes and a few extravagances. He had a difficult relationship with his parents, in part because of his startling resemblence to the late Prince Regent, Victoria's uncle.