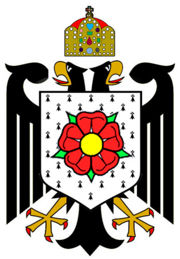 personal arms of Stephan I

Born Stephan Claus Johan von Lippe on May 22, 1920, he lived a relatively quiet life in the royal home, attending school and becoming close friends with several nobles. His college life was cut short with the Holy Roman Empire wars, and he joined up as a communications officer. He was sent to the Balkan Front for the majority of the war, but recalled to the homeland when Russian troops began pouring into the areas from the East.

He largely sat out the remainder of the war, and Lippe was largely spared during the allied onslaught. His family readily assisted the Allies in their occupation duty, at which time the young prince began to be noticed. He finally finished his college studies and graduated top of his class with a major in Law and Government, but minored in Social Sciences, at the University of Fulda in 1953.

He returned the Lippe, where he assisted his brother with post-war reconstruction, often going out to mingle with the people to get their take for various projects and laws. In a poll of roughly 1100 people in Lippe, 52% stated that they felt Stephan should be the Prince instead of his brother.

His local renown was soon leaking out to the nearby states, most notably Hessen. In 1963, with the death of Claus I, the election of a new emperor came about. Lippe nominated Stephan, and after nearly a week of debates, he was elected Holy Roman Emperor.

His reign is one noted for economic growth, as well as a small decrease in crime within the empire. He chose to relocate the capital of the empire to Fulda in 1965. He had a small estate built just outside the city, and had a new Imperial Diet built at the site of the town council building.

In 1970 Stephan I, amidst much controversy, abdicated. At first, many could not grasp the reason why a very popular emperor would abdicate, but it became apparent within weeks that his health was quickly declining. He had developed several cancers, most notably a brain tumor. He passed away on May 23, 1970, just one day after his birthday at the age of 50. The road leading in front of the Imperial Diet was renamed Stephanstrasse in his honor, and the Imperial capital has not been relocated since.