Thuringia (Thüringen), a member state of the Holy Roman Empire, is a Federation composed of various Duchies, a couple of Principalities, two Free Cities and a Republic. In fact, its coming about was something of an accident. 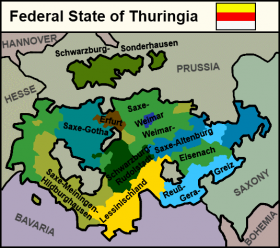 The following is in conflict with Established IB History

This state was formed largely out of fear of Prussian domination. As the Prussians began a military conquest of parts of Germany, an emergency Thuringian union was created in 1865. Though they could see that Bismarck was largely concentrating on Northern Germany at the time, they could also see that he could potentially hurt the southern states. This First Thuringian Union was little more than a meeting of the head of states, an informal agreement to temporarily present one face to Bismarck and the outside world. Secretly allying themselves with Bavaria and Austria, they quickly reinforced their border with Prussia. The moment Bismarck declared war on Austria, Thuringia and Bavaria declared war on Prussia. The Austro-Prussian War thus began. While Bismarck did indeed succesfully invade Thuringia, it gave the West German states sufficient time to mobilise their own forces. While Bismarck was preoccupied with Austria, the Western German States attacked Prussia, a peace treaty eventually being settled in 1867, agreeing that Prussia would remain inside its own borders unless attacked.

In the same year, the West German Union was created, and, in a blatant display of hypocrisy, threatened to annex Prussia if it did not comply to an ultimatum (essentially making Prussia a vassal state). The southern German states, and the now disunited again Thuringian Duchies supported this idea, and quickly Prussia buckled, giving in to the West-Germans. In 1871, the voluntary consent of all the German states, seeing the problems a disunited Germany could give, was given for a new German Union to be created, with the Kaiser of the Holy Roman Empire at its head.

At the same time, Thuringia united for a second time, the Second Thuringian Union. This was stronger, and had its own head of state and parliament, known respectively as 'Thüringische König', and 'Thüringische Tag'. This caused a small dispute as to how many electors Thuringia should have, but it was eventually decided that there should be only one, the König.

For a long time, nothing happened. In the Great wars, Thuringia was rather the most average land in the Union. Then, at the end of GWII, it suddenly became independent. To some degree, this came as a great shock to the inhabitants, and some of them spontaneously started rebelling and campaigning for more democracy. Previously, a hideously self-prolonging parliament had been in place, with the Thüringischen Länder voting for the Tag, and the Tag appointing the parliaments of the Länder. The campaign erupted into violence in several areas, especially in the South and in the cities. A group of Rebels seized both Erfurt and Weimar, even with the support of the local army regiments. They were quickly declared independent. A large part of Meiningen and all of Coburg was seized. The majority of the rebels were Läßinisch, and declared the area independent, establishing the Republic of Läßinischland. The remainder quickly disintegrated into a number of petty dictatorships and a few semi-democratic Free Cities. The König fled to Bayern, nearby.

A number of the petty dictatorships gave themselves titles, often many states holding the same name. These states had a tendency to go to war, and eventually a map similar to the old borders was established. One by one, however, the dictatorships fell to popular revolt. While there was rarely a duke or a prince in these territories, the old descriptive title was retained. In 1971, the Third Thuringian Union was established. Officially, the title of Duke or Prince was conferred jointly upon the Land's representatives in the Landesrat. This meant the representatives of Läßinischland were usually described, perhaps jokingly, as Consuls, and those of Erfurt and Weimar as Mayors.

According to the Treaty on Thuringian Union, the constitution of Thuringia, any member state may withdraw from the Union if the majority of their Deputies in the Tag support such an act. Another unique feature of the Thuringian constitution is that legally, a member state may call an election of its deputies at any time, as well as the General Election every 5 years.

Since then, Thuringia has been a rather boring state, fairly right-wing in their political views, but staunchly pro-democracy. In Läßinischland, there is a strong movement for independence, especially in the south.

Retrieved from "http://ib.frath.net/w/Thuringia"
Categories: Member states of the HRE | Lessinischland