Hannover (Hanover) is a territory that was at various times a principality within the Holy Roman Empire, an Electorate within the same, an independent Kingdom, and a subordinate Province within the Kingdom of Prussia. The territory was named after its capital, the city of Hannover, which was the principal town of the region from 1636.

Hannover was formed by the union of several dynastic divisions of the Duchy of Brunswick-Lüneborg, with the sole exception of Brunswick-Wolfenbüttel. From 1714 to 1837, it was joined in a personal union with England, which terminated upon the accession in England of Queen Victoria I as under the terms of Salic Law, a woman could not rule Hannover. Until 1803, when it was occupied by French and Prussian troops, Hanover was a constituent state of the Holy Roman Empire; when it regained independence in 1814, Hanover was raised to a kingdom, which has lasted through to the present day.

The Kingdom of Hannover is a constitutional monarchy, much in a similar fashion to that of England. Parliament is bi-cameral, the lower house being called "den Völkern Huus" and the upper house being called "der Öberen Huus". Hannover has adopted a free election process which allows each citizen to vote freely for whatever type of representation they feel appropriate. 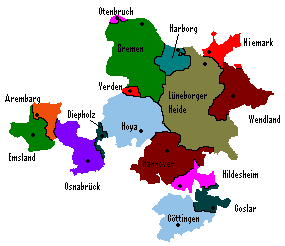 The 16 Provinces of Hannover

Hannover was founded in the Dark ages on the Leine river, its original name most likely being translated to ‘high bank.’

It began as a small village of ferrymen and fishermen, but grew to be one of the larger towns in the Holy Roman Empire by the 13th century. During the course of the 14th century a large city wall and four gates were built to secure the city, and the principal churches were then built.

The Duke of Calenberg moved his residence to Hannover in 1636, and his lineage thus became the Duchy of Hannover which had royal ties to England. One of his granddaughters married James IV of England and Scotland, his descendants later ruling that nation.

Under pressure from Prussia, Hannover briefly supported the Prussian cause to retain their sovereignty, which despite two Great Wars, has remained a kingdom.

In the extreme west of the kingdom is the Emsland, a traditionally poor and sparsely populated area, once dominated by inaccessible swamps. The northern half of Hannover, also known as the North German Plains, is almost invariably flat except for the gentle hills around the Bremen geestland. Towards the south and southwest lie the northern parts of the German Central Highlands, the Weserbergland (Weser mountain range) and the Harz mountains. Between these two lies the Hannoverian Hill Country, a range of minor elevations. The major cities and economic centres of the kingdom are mainly situated in its central and southern parts, namely Hannover, Göttingen, Nienborg, and Osnabrück. The region in the northeast is called Lüneborger Heid (Lüneborg Heath), the largest heathland area of the HRE and in medieval times wealthy due to salt mining and salt trade, as well as to a lesser degree the exploitation of its peat bogs up until about the 1960s. To the north, the Elbe river separates Hannover from Hamborg, Holsteen, and Meckelborg. The banks just south of the Elbe are known as Ole Land (Old Country). Due to its gentle local climate and fertile soil it is the state's largest area of fruit farming, its chief produce being apples. 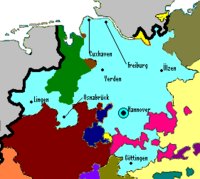 Agriculture has always been a very important economic factor in Hannover. Wheat, potatoes, rye, and oats as well as beef, pork and poultry are some of the kingdom's present-day agricultural products. The north and northwest of Hannover are mainly made up of coarse sandy soil that makes crop farming difficult and therefore grassland and cattle farming are more prevalent in those areas. Towards the south and southeast, extensive loess layers in the soil left behind by the last ice age allow high-yield crop farming. One of the principal crops there is sugar beet.

Mining has been an important source of income in Hannover for centuries. Silver ore became a foundation of notable economic prosperity in the Harz Mountains as early as the 1100s, while iron mining in the Salzgitter area and salt mining in various areas of the state became another important economic backbone. Although overall yields are comparatively low, Hannover is also an important supplier of crude oil in the European Federation. Mineral products still mined today include iron and lignite.

Manufacturing is another large part of the regional economy. Despite decades of gradual downsizing and restructuring, the car maker Volkswagen with its five production plants within the state's borders still remains the single biggest private-sector employer, its world headquarters based in Wolfsburg. Due to a legal act commonly known as the Volkswagen Law that has just recently been ruled illegal by the European Federation's high court, the state of Hannover is still the second largest shareholder, owning 20.3% of the company. Due to the importance of car manufacturing in Hannover, a thriving supply industry is centered around its regional focal points. Other mainstays of the kingdom's industrial sector include aviation, shipbuilding, biotechnology, and steel.

The service sector has gained importance following the demise of manufacturing in the 1970s and 1980s. Important branches today are the tourism industry with TUI in Hanover, one of Europe's largest travel companies, as well as trade and telecommunication.

The RLH, Royal Hannover Airline operates out of Hannover City.

The UBH, Union Bank of Hannover is situated in Osnabrück.

The most widely spoken language of the kingdom is Daitsch, a dialect of middle german. Daitsch, whilst being the national language, does not have a written form, and Low German is often substituted. Low German is officially used in all of Hannover, and all official documents are bi-lingual in High German aswell. Emisc, an Anglo-Frisian language is spoken in the far west of the kingdom, in an area called Emsland, and is based on the Old English of settlers that immigrated to the area and mixed with the local Low German and Frisian speaking population. It is the official language of Emsland, and is widely used in the public alongside Low German.

The Kingdom of Hannover does not have an official "State Religion", however there's is a large group of practicing Lutherans and Catholics with many churches scattered around the Kingdom. Within the constitution, no policies may be created to advance any given expression of religious thought or practise.

Retrieved from "http://ib.frath.net/w/Hannover"
Categories: Member states of the HRE | Hannover