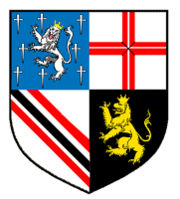 Arms of Saarland
Prior to the 20th Century, Saarland had not been its own political entity, being partitioned through the 18th century between France, Jervaine, Hesse and the Palatine Zweibrücken Dutchy. The decision to cede Saarland to France came in 1797 in the Treaty of Campo Formio, and was divided again by the Paris Treaty in 1815, where it was divided between the Rheinland-Pfalz and Preussen. The industrial revolution came into sway in the area after 1871 with treaties established with the Jervan nobility. With access to the extensive iron ore deposits of Jervaine, Saarland was able to use its equally extensive coal fields.

Saarland was established as its own political entity when the Treaty of Versailles at the end of the First Great War made it an autonomous territory, held under France until the people could vote for themselves to determine its final status. It was included by Field Marshall Hessler into the Province of Westmark when he began the Lebensraum campaign.

It wasn’t until the end of Second Great War that Saarland was granted its full autonomy as a distinct state in the Holy Roman Empire. In part of the peace accord, Jervaine was given right to extract coal from the Warndt deposit until 1981, although the customs union with Jervaine and France was dissolved in July of 1959, and Saarland was once again integrated with the Holy Roman Empire.

I've also added Saarland as a separate entity. I think it deserves that. And suppose, that later someone might come up with another Germano-Romance conlang... (JvS, 12181)

Retrieved from "http://ib.frath.net/w/Saarland"
Category: Member states of the HRE