Prussia as a kingdom was born out of the state of Brandenburg, ruled by an Elector. Its monarch eventually rose to the rank of Emperor of the Holy Roman Empire but this was ended as of the Second Great War. Among other things, the victorious Allied Powers insisted that Prussia repeal the so-called Salic Law so that women could inheirit the throne.

The son of Queen Wilhelmina is expected to become Friedrich V.

Prussians are first mentioned in the historical record by Adalbert of Prague in 997 in his description of the crusade to christianize them. The Prussian people originally lived along the Baltic coast, but because of their near constant rebellion against the Teutonic Order they were brutally subdued and were finally made to settle in the area covered by modern-day Skuodia and Latvia although as time passed many Prussians moved westward along the Baltic coast under pressure from the Livonians, Latvians and Skuodians. The name "Prussia" is descended from a Baltic people called the Borussi or Prussi, related to Lithuanians or Livonians.

Historically, Prussia consists of two components: East Prussia was originally established as a duchy ("Ducal Prussia"), which was a dependency of the Republic of the Two Crowns. In 1618 the Duchy was inherited by the Elector John Sigismund of Brandenburg, who with approval of Venedic crown was at the same time ruler of Prussia and Brandenburg, a German state centered on Berlin and ruled since the 15th century by the Hohenzollern dynasty. For Hohenzollern, the newly acquired state was very important, since it spread outside the reach of the Holy Roman Empire. This state, known as Brandenburg-Prussia, although divided into two parts separated by Venedic territory, was steadily drawn out of the orbit of the declining RTC. Under Friedrich Wilhelm, known as "the Great Elector," Prussia steadily acquired territories, including Magdeburg and enclaves west of the Rhine. In 1660, the Duchy was dissolved and the RTC's sovereignty over it came to an end.

West Prussia began in 1454, and as a result of the Thirteen Years War it became part of Veneda under the name Royal Prussia, which it remained until 1772, when it was incorporated into Prussia in the First Partition of the RTC. At this time German cultural nationalism was on an upswing and most German-speaking Prussians developped a fealty to the Holy Roman Empire. The Prussians often touted what were seen as purely Prussian virtues: sacrifice, strong laws and enforcement of them, and a 'perfect' organization.

Prussia grew almost constantly from 1767 until the end of the First Great War, dominating the Northern Empire politically and economically, with a very large population. In 1767 Prussia acquired Silesia and Lusatia on extent of Bohemian Kingdom.

The one and only stall in Prussia's rise before First Great War was the Congress of Vienna in 1815, where Napoleon's dictated the loss of Lusatia and Silesia to the Bohemian Kingdom, and of Premaria (Premarz) and some other holdings to the Republic of the Two Crowns. This built up a long lasting distrust between Bohemia,the RTC and Prussia. 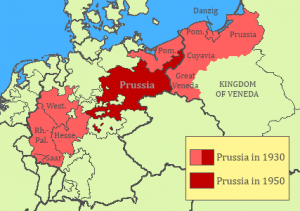 Especially during the 1920s and 1930s Prussia grew steadily, and became the nucleus of the Holy Roman Empire, incorporating one German statelet after another. Prussian expansion, especially the annexation of Danzig and the invasion of the Republic of the Two Crowns would ultimately cause the Second Great War.

In 1949, Prussia-dominated Germany was ultimately defeated. The Holy Roman Empire became an extremely loose confederation of more-than-semi-independent states. Both East Prussia and former Royal Prussia were incorporated into the Republic (as parts of Veneda); Danzig once more became a Free City; and the rest of Prussia was subdivided into four states: Westphalia, Rhineland-Palatinate, Preimern, and Prussia proper. For the next six years, these states would remain occupied and governed by the Allies, after that they were allowed to exist on their own. Although Prussia is still the largest state within the HRE, the international community still watches Prussia carefully to avoid it from gaining supremacy over the other German states again.

The Allied Powers in effect dictated a new form of government onto Prussia at the end of the Second Great War and during their occupation of same until 1955. The provisions were relatively straightforward and were designed to keep this nation from ever again becoming a military power capable of threatening the stability of Europe.

In practice this has meant a government continually in debt, divided between various political parties in a variety of unstable coalitions, with the old ruling class impeded if not cut off entirely from direct influence over politics or the military. Such was the intention.

On the other hand, the nobility retained both titles and property. And technically the Schlossplatz, while repaired and rennovated at public expense and serving as the seat of government, remains the personal property of the Monarch. Nor are members of the nobility in any way barred from political leadership or activity, only holding office. In the same respect, the Monarch retains a certain amount of political power simply by way of prestige.

Political parties within Prussia today include:

For much of the late 1980s and 1990s, the Chancellorship of Prussia was traded back and forth first between the FDA's Wilhelm Klimpt versus the CDU's Georg Grunwald, then the former's wife Hildegarde versus the latter's son Georg Grunwald II.

Retrieved from "http://ib.frath.net/w/Prussia"
Categories: Prussia | Member states of the HRE