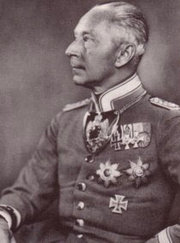 He was placed in charge of the Fifth Army during the First Great War, and served with distinction. Adolf von Hessler used the marriage of Wilhelm with Mecklenburg-Schwerin to leverage the compliance of Mecklenburg in his push to unify the Holy Roman Empire prior to the Second Great War.

Upon the death of his father in 1941 Wilhelm served as the token Kaiser for the rest of the war. He was very much a figurehead in fact, if not theory, because Hessler commanded the government (especially the military) and enjoyed overwhelming popular support. By 1949 this had changed, and Wilhelm became part of the cadre of top officers and officials who ousted Hessler, having him committed to a hospital for the mentally ill. As part of the peace settlement, Wilhelm abdicated in favor of his eldest son, Wilhelm IV. He died 20 July 1951 at his family's home in Prussia of a heart attack.