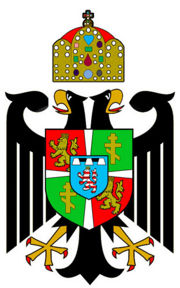 Ferdinand VI (born 1923, reigned 1950-59) was the first Holy Roman Emperor following the Second Great War. The Allied Powers insisted that the imperial throne be made truly elective, that Wilhelm III abdicate and that his son be barred from the purple. The first conclave of Electors felt pressured by the war's victors to choose someone the Allies themselves liked, whether such was the intention or not. In the end, they begrudgingly chose Prince Franz Ferdinand of Battenberg. The young man, age 27 at the time, was an officer in the Kriegsmarine but his mother was related to the royal families of England and the Scandinavian Realm.

The reasoning behind his election was that his was a German royal house of ancient lineage, connected to other dynasties, but that hadn't caused any trouble. For example, Prince Franz Ferdinand was of the Battenberg line barred from succession to the Grand Duchy of Hessen. He was amiable, got along well with members of the Occupying Forces, was known to have donned a military uniform only under duress. His biggest interest at the time seemed to be wooing the girl who would become his bride, a member of the royal family of Xliponia.

However, he was viewed as little more than a traitor by many Germans, largely because he did his best to maintain good relations with the Allies. The Electors over time grew less and less timid about proclaiming to everyone who'd listen how much pressure the Allies had applied, and it could hardly be denied that the young Emperor, while handsome, had little or no experience at such a grand position. Worse, he was seen as a giddy, even foolish personality.

In 1959, the Diet formally requested his abdication and it was seen as a supreme vindication of that decision that he complied almost immediately. He went on, ironically enough, to become the "elder statesman" of the Holy Roman Empire, a diplomat and adviser as well as sometimes-legislator whose personal popularity has reached considerable heights. Even today, the old man finds himself the object of various groups who request that he be again elected to the purple.