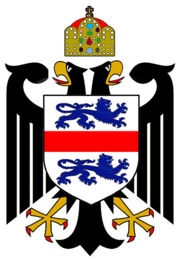 arms of Emperor Claus I
Claus I (born 1907, reigned 1950-1963) was the secondt Holy Roman Emperor elected after the Second Great War.

Born Claus Philipp Maria Schenk Graf von Stauffenberg in Wuerttemberg, the future Emperor was inclined towards literature but eventually took up a military career. He was commissioned a lieutenant in 1930. When the war began, he was assigned to the Eastern Front and later to the French Stalemate. His specialty was tanks, although later he became a member of the General Staff, rising to Lieutenant Colonel by 1943. In 1944 he was severely wounded, resulting in the loss of an eye and his right hand.

Within another two years he was a full General, and became a military adviser to the politicians who engineered the political coup stripping Adolf Hessler of political power. His role in this was not generally known, save among the leadership of the Empire.

The conclave of Electors in 1959 chose von Stauffenberg as the new Emperor as a compromise candidate. He was not Prussian, of noble but not royal birth, a Roman Catholic rather than Protestant, well known to the politicians and top military officers. It did not hurt that he was handsome and a wounded war hero, as opposed to the austere son of Kaiser Wilhelm II. However, the choice did not sit as well with the Imperial citizenry as expected. Emperor Claus was accepted, but never really popular, and his subtle but persistent nationalism was increasingly compared to the low-key Wilhelm IV. Between the two, the Prussian King seemed to be living for the future and in the present. The Emperor, on the other hand, was said to be dwelling in and for the past.

Following surgery to remove shrapnel from his body (left over from the war), Claus I died of pneumonia in 1963.