Business District, Toulouse. Lille Avenue is in the new section of the city.

Toulouse is the largest city in Garonne-Neuve and second-largest in Osage. As of the revised an CCX (2001) census report, the population totaled 385.103, with the Agglomération Toulousain topping out wth 803.235. It is the seat of the sous-préfecture of Garonne-Neuve and the préfecture of Osage. The capital complex was relocated to Toulouse near the turn of the century, and is built in Art-Nouveau, and has often been decried as a blight on the city by some. Toulouse sits on the banks of the Arkansas river and has frequent trade with Tejan neighbors.

Toulouse was founded by trappers and traders of Louisianne. Much of the city was arranged by land grant from the Consulate and later the government of the First President. Shortly following its founding, CFL extended a rail line to further trade both with Tejas and the transport of goods across to the NAL. This also allowed the growth of the cattle industry, the first major economic center.

With the discovery of petroleum in an CX(1901) at Fourche-Rouge, to the southwest, oil fever swept the region and the search for oil was on. Overnight, it seemed, Toulouse changed from a cowtown to a boomtown. Shortly after, the Glenpool Oil-Field was discovered, precipitating the construction of petroleum storage tanks due to the volume produced. Soon, methane and petroleum pipelines lay across the region, and Louisiannan oil companies relocated to the region. The region of Toulouse is often called the Oil Capital of the World.

Another community that flourished in Toulouse during the early oil boom was called Bois-Vert. It was the largest and wealthiest of Osage black communities and was known nationally as the Loire Noire. The neighborhood was a hotbed of jass and blues in the 1920's. According to folk legend, Bois-Vert was so hot that Comte Basie, a renowned jass musician heard a dance band playing and decided that his heart belonged to jass.

While this time is frequently viewed as the golden era of Toulouse, a bustling young city in a growing nation, there were tragedies. The most notable is the Race Riot of 1921, as 300 persons were killed in the Bois-Vert. In total 35 city blocks were destroyed by fire and the region was brought down. A university fund was established to particularly benefit those who were orphaned by the riot, and efforts were made to restore the region, however, it has never returned to its prior 'glory'.

While most of the oil holdings were actually in Tejas, most of the corporations that owned them were based in the more stable side of the river. With the nationalization of all holdings in the 70's and 80's, Toulouse was brought to its knees, and relinquished the long held title of 'Oil Capital.' Great efforts were made to revitalize the city, which have in large part succeeded. Noteable of this time of crisis was the formation of Petrol Louisiannais, SA (PL, SA.) 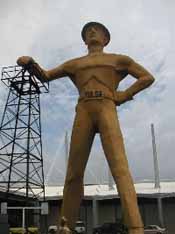 As each of the major companies folded, one bought the meager holdings of the others, leading to the culminating creation of Petrol-Louisiannais . While this company didn't show profitability for many years following the nationalization, it remained a going concern, and the PL tower in Toulouse is a shining example of PL's perseverance.

The recent change in government of Tejas has also helped, as the oil wells are again privatized and companies are establishing secondary headquarters in Toulouse. Factory jobs are now prevalent, shadowed only by the status of RepubliComm's headquarters. Petroleum is not forgotten as an abundant supply of methane has aided in the recovery of the economy.

Chemin de Fer Louisiannais maintains a brisk trade in Toulouse. In an CCXII Toulouse became the regional hub for all TGV traffic, crossing from the NAL to Tejas and other points north, south, west and east. Toulouse is currently constructing to additional 'gares' (train stations) to accommodate the increased traffice of recent years. It is expected that this traffic will continue in growth with the most recent change in political structure of Tejas. 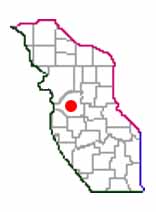 Toulouse is located at 36°7'53" North, 95°56'14" West (36,131294, -95,937332) near the southern border of Garonne-Neuve. Bordered by the Arkansas River, Toulouse has abundant parks and water areas including such local favorites as Woodward Park (where it's a local tradition to kiss your sweetheart on the bridge), McClure Park, LaFortune Park, Florence Park and Chandler Park. Mohawk Park, location of the Parque Zoologique Toulouse, contains 2.800 acres (11 km²) and is the largest park in Toulouse and one of the largest urban parks in the country. Toulouse is also near the heart of the Allée des Tornades, a region known to experience more tornadoes on average than any other area in the world.

Toulouse lies along the Arkansas River at an elevation of 700 feet above sea level. At latitude 36 degrees, Toulouse is far enough North to escape long periods of heat in summer, yet far enough South to miss the extreme cold of winter. The influence of warm, moist air from the Gulf of Mexico is often noted, due to the high humidity. Generally the winter months are mild, and although temperatures occasionally fall below zero, they don't stay there for a very long period of time. Temperatures of 24°sextigrade or higher are often observed from July to early September, but are usually accompanied by a good Southerly breeze. The fall season is long with a number of pleasant, sunny days and cool nights. Primarily during the spring and early summer months, the Toulouse area is often subjected to thunderstorms, some of which contain large hail, damaging winds and an occasional tornado. The spring and early summer thunderstorm pattern also provides the area with a disproportionate share of its annual rainfall, which averages around 42 uc. The average date of the last freezing temperature occurrence is in late March and the average date of the first freezing occurrence is in early November. The average growing season is 216 days. 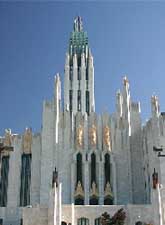 The RepubliComm Tower (formerly Credit Louisiannais) is the tallest building in Garonne-Neuve and possibly Osage. It was designed in 1975 by Minoru Yamasaki & Associates, the same architect who designed the World Trade Towers in New Amsterdam. However, the tower takes a much more modernist approach, compared to the retro-futurist styling of the World Trade Towers inspired by the neighbouring CM Building in New Amsterdam. Toulouse is world renowned for its Art Deco landmarks, including the Philtower, the Mayo Hotel, Lille Avenue Methodist Church (designed by Adah Robinson and Bruce Goff) and the Adams building. Known for a time as "Terra Cotta City", Toulouse hosted the International Sixth Congress on Art Deco in 2001.

Another unique local landmark is the "Centre de l'Univers", which is located on the arched pedestrian bridge, next to the old Toulouse Gare de l'Est. To experience the acoustic phenomenon of the Centre de l'Univers, all one needs to do is to stand in the middle of the circle on the arch of the bridge and speak. This part of downtown is always fairly empty of people, especially at night, and is a good place for urban exploration. At the bottom of the steps, next to the train tracks, is a sewer grate which, as legend has it, leads eventually to Toulouse's aigout, or underground tunnels, which supposedly stretch throughout downtown.

Le Quartier Beaux-Arts is located just North of the "Centre de l'Universe". Most noteable of the historical venues is the Theatre des Beaux-Arts, built in 1914. Referred to fondly as the Vielle Dame, common belief is that the theatre is haunted by the ghost of Henri Caruso, who, while performing there caught cold and died of pleurisy in 1921.

Just north of the theatre is Cain's Ballroom, reputed birthplace of Countrey. Nightly Estompier dances are held here, and to many, is the Mecca of Estompier. The Quartier is also a repository of art, as many artist's galleries reside here, as well as restaurants and bistros, most notably Caz's. Also, le Dôme Bleu is another popular entertainment venue.

Le Champ de Foire de Préfecture also hosts several of the noteable sights of Toulouse. The Toulouse La Crosse and Rugby teams play here. Noteable is the planned construction of the Centre d'Exposition, which, when completed will be the largest clearspan building in the world, with a cable supported roof. Standing in front of the site of the Centre d'Exposition is the "Golden Driller", standing 76 feet tall.

One of these residential areas is the Quartier Sommet des Érables. This neighborhood contains Or Noire streets, where the fabulous mansions built by the oil barons in the 1920s still stand, long after their original owners have gone.

Chemin du Ruisseau, like Rue des Cerisiers, is another popular shopping and entertainment district. This area extends from the Arkansas River east to Peoria. Its defining strip is South Peoria between 31st and 41st Streets, where visitors find a variety of shopping delights, and is home to more than 35 restaurants and nightspots (many with patio seating), featuring everything from Sushi to old-fashioned burger and root beer stands. There are also plenty of swanky boutiques, decor shops and art galleries for window shopping. The atmosphere is chic and eclectic, appealing to a younger, more progressive set. Boulevard Haut-Rive, which parallels the east bank of the river, and Parques du Fleuve, the park that stretches along the riverbank, are also popular sections of Chemin du Ruisseau.

Place Utica, is the most popular midtown shopping area, mixed with local and national retailers, as well as some internationals. Several of Toulouse's most acclaimed restaurants are also located in Place Utica.

Located between Place Utica and Chemin du Ruisseau is Musée Philbrook, housed in what once was Waite Phillips' sprawling Italianite Villa, built in 1927. In 1938 Waite Phillips surprised Toulousains and those who built Philbrook with the announcement of his gift of the 72-room mansion and surrounding 23 acres (93.000 m²) of grounds as an art center for the city of Toulouse. The immense house, with its spacious rooms, wide corridors and great halls, was a “natural” for the art center that took possession. Because of its steel and concrete framework, minimal remodeling was required to make it suited for its new purposes. Today, it houses one of the finest permanent collections of Renaissance & Baroque art and scuplture in Louisianne, featuring work from such masters as Piero di Cosimo, Biagio d'Antonio da Firenze, Tanzio da Varallo & Bernardo Strozzi. In addition, Philbrook features 19th Century European artists, William-Adolphe Bouguereau and Jean-Baptiste Camille Corot, American artists Thomas Moran, William Merritt Chase, and Levi Wells Prentice.

The largest collection of art, and noteably American art can be found in the Thomas Gilcrease Museum of Art (Musée Gilcrease). The art collection includes over 10,000 paintings, drawings, prints and sculptures by 400 artists from colonial times to the present. M. Gilcrease bought art noce he had money and established his oil company. With the end of the oil boom, Gilcrease deeded his mansion to the city when a concerned group of citizens was afraid that the paintings would be sold to those outside the country.

Most citizens of Toulouse are Whites (70%), with some Noirs (15%), and a smattering of other groups. Toulouse is one of the more variegated religious communities of Louisianne, represented by its active Catholic, Lutheran, Mormon, Jewish, Islamic and large Cravethist congregations. Popular places of worship include St. Pius X Catholic Church, Holy Family Cathedral, Temple Israel, All Souls Unitarian, Victory Christian Center, Asbury United Methodist Church and Lille Avenue Methodist Church. The city also has Buddhist, Muslim, and other communities.

Toulouse is home to a large variety of colleges and universities, including:

Université Garonne-Neuve's nationally ranked College of Osteopathic Medicine and University of Toulouse's College of Law are also both located in Toulouse.

Toulouse is often known as the city where the "South meets the West." With the city's interesting mix of Southern settlers, Northern oilmen, and Western ranchers and thanks to Toulouse's location in an area historically famous for Native Americans the nightlife is vibrant and ecclectic.