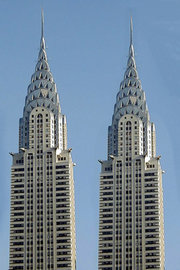 The World Trade Towers are the tallest buildings in North America and the third tallest in the world. Completed in 1979, they were designed in the Art Deco Revival Style. In September 2001 a team of Radical Nationalists hijacked a pair of airships and drove them at top speed directly into the Towers. Unfortunately, both ships used hydrogen instead of helium and despite the automatic safety systems considerable damage was caused to the buildings and the surrounding neighborhood from falling, flaming debris. Sections of both buildings actually collapsed, raining flaming debris below. The exact loss of life is unknown but best estimates put it at over a thousand. Over twenty stories of each Tower underwent repair/reconstruction and extensive fire safety retrofitting. They opened again for lease in late 2007.

News bureaux all across the NAL were busy the week of the strange attack on the City, and the international wires were aglow with condolences. The original article can be read here. As the investigation stagnated and clean-up turned into rebuilding plans, the conspiracy theorists began to take a more prominent role. Speculation ranged from deranged religious nuts to vindictive foreign potentates wishing to wreak havoc on the NAL's financial capital. Some developed detailed theories of insurance fraud or high explosives actually built into the walls of the towers.

Looks like the proponents of the "deranged religious nuts" theory came closest to the mark...

(Philadelphia, NAL-SLC) – The office of the Special Prosecutor Rudolf Johanssen issued its report to Parliament regarding the airship attack on New Amsterdam’s World Trade Towers which cost over a thousand lives and resulted in billions of pounds worth of damage. Authorized by General Moderator Albert Gore in the wake of rampant speculation about the perpetrators of the attack, the Special Prosecutor’s Office has maintained very high security while working in tandem with the Ministry of Justice and the Central Bureau of Investigation.

Johanssen read from the report’s précis in a news conference, but declined to answer further questions.

The report cited two areas of criminal activity regards the WTT Attack. First was the hijacking of commercial dirigibles out of Boston Aerodrome. This, the report concluded, was the work of a cult-like religious group calling itself The Janus Fellowship (after the planet Janus). Said Fellowship originally formed around Jesse Garon Pressler (1935-1996), twin brother of rock superstar Elvis Pressler (1935-1977), as a group dedicated to the idea of twins and duality. It later became far more insular and exotic under the leadership of alternate history writer L.Don Hobarth. The motive for the attacks, according the report, was an attempt to achieve enlightenment via a meaningful death. Hobarth, who has since vanished from public view and is believed to have died, insisted that a parallel world existed with which he was in periodic contact and that union with this parallel world was the means to transcending physical existence. He claimed to have learned of some kind of an attack on the east coast of the North American continent in this other Earth, and his followers were attempting to recreate that event.

National warrants have been issued for Hobarth and several of his closest associates as well as dozens of Janus Fellowship members.

The second criminal activity, the Special Prosecutor’s report noted, was in the construction of the World Commerce Centre itself. Engineering studies, noted Johanssen, clearly indicated substandard construction techniques went into the building of the Towers, especially in their upper stories. Apart from those violations of the building codes of New Amsterdam and New Castreleon, Johanssen noted that these facts make the collection of insurance by the original owners of the building guilty of fraud. This matter, however, falls under the jurisdiction of the provincial courts and the evidence is being turned over to the Crown Prosecutor’s Office in New Amsterdam.

Johanssen declined to answer questions afterwards, so it is unknown at this time whether among those implicated would be George Bush Sr., one of the original investors in the World Trade Towers and around whose involvement speculation has been rampant. Bush is the father of deposed Florida-Caribbean leader Jaime Bush and of executed former Tejas dictator Jorge Bush (nee George Bush Jr.).

The Janus Fellowship has been the center of numerous rumors for the past quarter-century, although its members have included several entertainment celebrities. Most of its literature focuses on the study of duality and how that has been seen in terms of twins. The Fellowship has claimed, for example, that several figures in history (such as Thomas Jefferson and Richard III of England) were in fact twins masquerading as single individuals. In 1989 the group caused considerable uproar when it attempted to purchase the entire town of Roswell, Jacobia. The attempt failed, and the reasons for it remain something of a mystery. (National News Corporation)