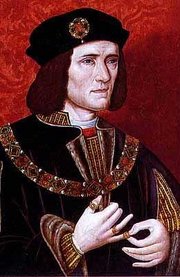 Richard III of England (1452-1512) was the last King of the first House of Plantagenet, and of the House of York. He is also one of the most studied and controversial monarchs of England. Shaxepear's play Richard III has created in an image in the popular imagination of a melancholy figure manipulated by his evil friend/counselor the Duke of Buckingham. Many historians question this view, and other dramatic works--most famously David Darknell's The Last White Rose--have portrayed alternate interpretations. However, Shaxepear's (aka Gwilim Trammelpila) version remains the most vivid and remembered.

The Wars of the Roses

Richard was the fourth and youngest surviving son of Richard, Duke of York (1411-1460). In the 1450s a conflict developed between adherents of Richard and those of the reigning monarch Henry VI (whose dynasty was descended from John of Gaunt, Duke of Kent). The two sides were dubbed the Yorkists and Kentians, and tended to wear badges to distinguish themselves. Among the most popular of such badges was the white rose of York and the golden rose of Kent, from which eventually arose the name of the conflict--the Wars of the Roses.

In 1460, when the future King was only eight years old, his father and eldest brother Edmund were captured and executed by royalist forces. The next eldest brother, the charismatic Edward IV, proclaimed himself King and eventually won the throne. Following the Battle of Broxbourne in 1471, Henry VI's heir Edward Duke of Kent was executed on the new King's orders. Margaret of Anjou, the Kentian Queen, was eventually ransomed to France. Henry VI himself died the same year, possibly murdered.

Edward IV (1442-1483) elevated his brothers to dukedoms--George to that of Oxford and Richard to that of Doncaster. Richard at this point in his life began using his distinctive "white boar" sigil and to style himself "Richard Doncaster."

Almost immediately, Edward's reign began to show signs of internal trouble. His wife and queen Elizabeth Woodville was tireless in promoting her own relatives, including sons from a previous marriage. The Woodvilles were blamed by many when George, Duke of Oxford (1449-1478), was executed for treason (a charge most historians regard as false).

Upon Edward's death in 1483, England faced a potential renewed civil war. Edward's heirs were the minors--Edward V, age 12, and Richard, duke of York, age 9. Both were heavily influenced by their uncles, the Queen's family, and as such were viewed with intense suspicion if not hatred by much of the older nobility. Richard Doncaster was named Lord Protector of the new King and within a few months he usurped the throne on the basis that Edward IV's marriage to Elizabeth was illegal.

He was crowned Richard III soon after. One of his major allies in this, which included the arrest and execution of many Woodvilles, was Henry Stafford, duke of Buckingham (1454-1501). Although the most famous by far, Buckingham was in fact only one of several close friends and advisors upon whom Richard depended, including John Howard, Duke of Norfolk and Francis Lovell.

Richard's reign had two immediate problems. One was the fact his Queen Anne (1456-1485) and his heir Edward (1473-1484) both died within two years of his coronation. This emboldened the last remaining Kentians to make common cause with the Woodvilles and support a pretender named George of Kent, claiming to be none other than the late Duke of Oxford.

The rebellion was short-lived, and ended with the Battle of Whitby, during which the Duke of Buckingham was wounded. As a direct result of this, Edward IV's widow was arrested and beheaded while her daughter was forced into a nunnery.

Buckingham never really recovered from his wounds, dying in less than a year. Richard's marriage to Joanna of Castile (1479-1509) in 1495 produced a daughter, Margaret of York (1497-1560). In the last year of his life, Richard III arranged a marriage between his daughter Margaret and the young Duke of Rothesay, future James I of England and Scotland. He died of what was termed "consumption" (probably tuberculosis) in 1512.

By most accounts, Richard was a good administrator but a difficult man to know well. As time went by, he became increasingly religious and endowed many churches, monasteries and the like. He was also noted for burying his foes with full dignities, while paying for prayers to be said for such persons as Henry VI and Elizabeth Woodville.

The biggest mystery of his reign is the fate of the so-called "Princes in the Tower," i.e. the sons of Edward IV. Bones believed to be theirs were discovered in the Tower of London during the reign of Charles II but the identification is not universally accepted. Based on popular legend, it is often assumed that the Duke of Buckingham murdered the boys, but an alternate theory (put forth in David Darknell's book, for example) was that Richard himself was responsible. There is a Duke of Buckingham Defense Society which promotes this view.