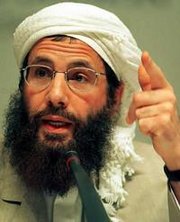 An excellent student, he became an alim in early 1960’s and started to preach at a mosque in Baghdaad. He also wrote many articles in a newspaper, not only about religion but also about politics. He had his own vision of Pan-Arabism, for him it should be the union between all arab countries having as point of union the language and the same Islamic faith not on a secular state. Religion should be the centre of all Arab peoples' lives.

In 1968 president Abdul Karim Qassim met Saddaam Hussayn personally and surprised by his intelligence and opinions invited him to join the presidential religious council. Later, in 1972 Qassim made of Hussayn his Minister of Religion.

Iraaq was at the time tolerant to all religions and factions within Islam. With Hussayn as minister the regime tended to be closer to Sunni Moslems than to Shiites. Also the followers of Zoroastrianism started to be persecuted (albeit with relatively little violence) as they were considered too close to Persian interests.

At the same time Hussayn kept writing his articles at the press and started a radio programme which he used to preach. This made of him one of the most popular characters of the regime, known popularly as Sheik Hussayn.

In 1977 Hussayn became Prime Minister of Iraaq while the regime was turning slowly towards religion. At that time Iraaq faced an economic crisis due to consecutive years of low oil prices. The efforts of industrialisation made by Qassim since the 1960’s weren’t as successful as expected and Iraaq was one of many oil producing countries facing major problems due to the Oil Crisis of 1973 (known among Muslim oil producing countries as Oil Crisis of Hijra 1393). Qassim was losing his popularity among the people as well as the circles of power. Also the connections between the president and foreign nations were disliked by several sectors among the military and the religious communities.

On 16th July 1979 Saddaam led a coup d’etat against Qassim. The president tried to escape but was captured by the military while trying to reach the French embassy for political asylum. On that same day Qassim was judged, condemned and executed. Sheik Hussayn proclaimed himself the new president of Iraaq.

Hussayn took prompt measures. He abolished the constitution of 1958, the single party (Congress of Iraaq, which was replaced by the Party of God or al-Hizb Allah) and the penal code, which were replaced by the Koran and Sharia respectively. Women lost their political rights and all non arab and/or non Moslems lost their Iraaqi citizenship. This forced many Assyrian and Turkoman to go into exile and the small Jewish minority to go to Judea, Yemen, or the GRE. Those minorities who stayed in Iraaq were forced to wear a distinctive badge identifying them. At first the conservative neighbouring arab monarchies (especially Saudi Arabia, Kuwayt and some of the emirs of the Thousand Emirates) were pleased with these changes from Baghdaad and permitted Iraaq to return to COPEN.

Only faithful Sunni followers were allowed to remain in government while all Shiites were expelled. Large purges followed at all levels of power (from local to central) and among the military. Soon Sunni followers had the complete control of the entire country. Posters of previous regime were replaced by new ones with slogans taken from Koran. Also a religious police force was created to persecute the “infidels, the atheists and the heretics” and which destroyed much of the pre-islamic heritage of Iraaq, especially statues which had faces in an effort to "destroy idolatry".

Although the Shiites didn’t lose citizenship they faced restrictions on their public cults and they were forced to pay higher taxes. But the followers of Zoroastrianism faced the worst troubles as they all were sent to concentration camps far way from the Persian border.

Qassim’s oil policies of high oil production caused consecutive years of low prices since 1973. Since then an economic crisis erupted in almost all Middle East countries. Hussayn needed to make the economy better to keep his supporters. He had two options: reducing the oil production to make higher prices or to create a climate of instability in the region. Reducing the oil production would cause unemployment and definitely hurt his popularity. Hussayn then played the card of nationalism and pan-arabism to shake the entire region.

During 1980 Hussayn claimed the Persian province of Khuzestan as historical part of Iraaq. He also wanted to release the local arab majority from “the oppression of the Great Persian Satan”, according to his own words. Most observers agreed Saddam was more interested in Khuzestan oil fields but for the common people local arabs should be released.

On the 17th September 1980 Iraaqi troops crossed the Persian border. Propaganda showed this invasion as the freeing of the arabs of Khuzestan and a jihad (holy war) against the Persian infidels. At first Iraaqi troops were very successful, being the best well armed in the entire region. Hussayn claimed victory. But Persian troops were much more numerous and in 1982 iraaqi troops were expelled from Khuzestan and the war came to a long stalemate. Since then the war was fought at the border and both sides used all possible methods to take advantages such as destroying oil facilities, attacking civilian targets and Iraaq even used biochemical weapons against Persia.

Despite high losses both countries were able to finance the war as the oil prices reached historical maximums (higher even that during the Suez Crisis in 1956) and both Iraaq and Persia reaped huge profits. Hussayn’s plan worked. The war ended on August 1988 with huge casualties on both sides (1.5 million dead). It was the deadliest war since the Great Oriental War and the Second Great War ended, in 1949. Beside destruction, casualties and the oil prices nothing really changed compared to pre-war period.

To distract people from the results of the war against Persia Hussayn played once again the card of nationalism. During 1990 he claimed the small shaykhdom of Kuwayt as historical part of Iraaq. Again the excuse of uniting the Arabs and freeing an oppressed people was used. This time Hussayn accused the kuwayti monarchist rulers of oppressing their arab population and the invasion started on the 2nd August 1990. Kuwayt surrendered within a month and the shaykhdom was totally sacked.

The League of Nations condemned Hussayn’s policies on Kuwayt, made an international embargo and sent him an ultimatum to retreat from the shaykhdom by 16th January 1991. This was used by Hussayn to show the population that “the infidels are against the iraaqi achievements and the Muslim Arab nation”.

On the 16th January 1991 a coalition of troops (mostly from arab moderate countries like Egypt and Syria) started to release Kuwayt coming from the saudi border. Although saudi religious dominated government was sympathetic to Hussayn it was pressured by the other arab countries to co-operate. This action lasted a single month and at the end of February Iraaqi forces were totally expelled from Kuwayt. About 100 000 iraaqi died during this war and the country became totally isolated from all other countries.

During this isolation Hussayn regime became more and more repressive and couldn’t buy weapons from foreigners. But the Islamic Republic of Sanjak gave some supports to Iraaq selling weapons they had inherited from the CSDS and broke the international embargo. Saudi Arabia also did the same.

Riots in several different areas occurred. On north the Assyrians rebelled with the help of Syrian government and Hussayn’s reply was terribly violent, using chemical weapons against the Assyrian population and causing thousands of deaths. This rebellion was totally defeated.

In the south Shiites started their rebellion against the Sunni controlled government. Major causes were the terrible oppression suffered by the Shiite “Marsh Arabs” and especially the ecological devastation caused by the Perso-Iraaqi War (1980-88) and the Gulf War (1990-91). As result Basris embraced the ecotopian ideology as a way to rebuild their region.

The rebellion started just after Iraaqis were defeated in the Gulf War and Al-Basra declared its independence which soon was recognised internationally. As usual Hussayn replied the rebellion with extremely violent measures but the Basri were assisted by other ecotopian countries, especially Oregon. Iraaq was constantly attacked by basri ecoterrorists attempting to destroy Iraaq’s oil production. Iraaq wasn’t being able to defeat the rebellion and recover its door to the sea, as Al-Basra occupied the southernmost region and only to be opened to sea.

For Hussayn this was a “holy war against the heretic Shiites” looking for grant supports from the Sunni population. But the once powerful Iraaqi armed forces were weaked and this conflict, although long, wasn’t as violent as previous ones. On March 2003 Saddaam Hussayn gave an ultimatum to Al-Basra and threatened to make a final effort to reconquer the rebellious province. A coalition of regional, world Ecotopic, and other forces came to Al-Basra's defense and Al-Basra was able to keep its independence.

On that March 2003 the Iraaqi people was completely tired of all that succession of bloody wars and of the theocratic rule from Baghdaad. Sheik Hussayn was no longer popular either among the circles of power nor among the common people.

On the 20th March 2003 several middle rank military officers went to the streets and started a coup d’etat. Although the population was advised to stay at home, the streets filled with people expressing support for the overthrow of Hussayn. The military lay siege to the presidential palace and sent to the president an ultimatum: Surrender or we will destroy the entire palace. Hussayn surrendered at the end of that day and military had to escort him for his own protection. It was the end of the most despotic rule in the world after Iossif Vissarionov from Russia died in 1958.

Since his capture, Saddaam Hussayn stays imprisoned and under a long international trial for crimes against Mankind and war crimes among many others. Iraaq, Persia, Al-Basra and Kuwayt wanted to judge in separate Saddaam Hussayn but later all agreed that his trial would be sponsored by the LoN. As result the ex-president is being judged with all personal rights he refused to give to all those who were judged in his country during his rule.