The Iraaqi Arab Republic (Arabic العراق) is a Middle Eastern country in southwestern Asia at the confluence of the Tigris and Euphrates Rivers, formerly the site of such ancient empires as Babylon, Mesopotamia and Ur. 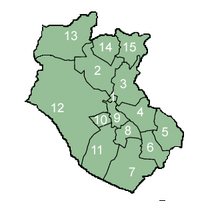 ‘Iraaq as a sovreign state dates back to the collapse of the Ottoman Empire in 1920. The Federated Kingdoms jointly administered the newly-created State of Iraaq as a League mandate. They had considerable trouble with their new territory, and in 1921, established a Kingdom of `Iraaq, with Faisal bin Husayn crowned as King of `Iraaq. His son and grandson followed him as Kings of `Iraaq until 1958, when his grandson, King Faisal II, was deposed by Abdul Karim Qassim, who proclaimed himself Prime Minister of `Iraaq. Qassim began a search for an acceptable native King of `Iraaq. This search officially continued until *1968, when the Republic of `Iraaq was proclaimed.

The southernmost region of ‘Iraaq, Al-Basra declared its independence in the wake of the environmental devastation inflicted on its land during the Perso-‘Iraaqi War of the 1980's and the Gulf War (‘Iraaqi invasion of Kuwayt) in the early 1990's. Another important cause of the secession was the oppression suffered by the mostly Shi‘ite "Marsh Arabs" of Al-Basra at the hand of Saddaam Hussayn and his Sunni powerbase up in Baghdaad. However, since the more immediate cause of the rebellion was ecological, the Basris embraced an Ecotopian ideology, and Oregonian Peacekeepers assisted them in building their country. Since independence, Basri culture has developed a stronger and stronger emphasis on revolutionary ecotopism. For a decade after independence Basri ecoterrorists routinely infiltrated ‘Iraaq, attempting to destroy its oil-production infrastructure. This lingering conflict with ‘Iraaq lasted until the March, 2003 ‘Iraaqi ultimatum when Hussayn threatened to reconquer Al-Basra. A coalition of regional, world Ecotopic, and other forces came to Al-Basra's defense, and in the end Hussayn was deposed by his own people, ushering a hopeful new era of peace into the region. After the 2003 scare, Basri terrorist activity against ‘Iraaq ended.

The terrain is mostly broad plains; reedy marshes along the Persian border in south with large flooded areas; mountains along borders with Persia and Turkey.

The local climate is mostly a desert clime with mild to cool winters and dry, hot, cloudless summers. The northern mountainous regions experience cold winters with occasional heavy snows, sometimes causing extensive flooding. The capital Baghdad is situated in the centre of the country, on the banks of the Tigris. Other major cities include Basra in the south and Mosul in the north. Iraaq is considered to be the cradle of human civilization.

Ethnically, Iraaqis are divided into Arab 90%-95%, Turkoman, Assyrian or other 5%.

Islam is the most prevelant faith within Iraaq. Minority religions of Iraaq include Zoroastrianism, Assyrian Christianity, Judaism, Manesianity and Eastern Orthodoxy.

Retrieved from "http://ib.frath.net/w/Iraaq"
Categories: Work in progress | Iraaq | Nations in the Middle East