The government of the CSDS was divided into federal, national and subnational levels.

According to the 1977 Constitution, the highest body of government at the federal level was the Supreme Soviet of the CSDS (Verhovni sovjet SSDD in Serbian; commonly abbreviated Verhsov in all languages).

Directly subordinate to the Supreme Soviet was the Council of People's Commissars of the CSDS (Sovjet narodnih komisara SSDD; Sovnarkom), which comprised the heads of each of the 28 State Committees (Narodni komisarijat; Narkom), who were officially elected by the Supreme Soviet; in practice, however, they were named by the Politbiro.

The 28 State Committees were:

Each member state of the CSDS had its own national assembly, known as the National Soviet (Narodni sovjet; Narsov).

Though each state was a unitary entity, these were subdivided for purely administrative purposes. Each state was divided into regions (rejon); each rejon was further subdivided into districts (oblast). Within each oblast were further lower-level divisions: cities and towns (grad), villages (selo), collective farms (kolektivna privreda; kolpriv), industrial combines (kombinat) and rural municipalities (seoska opština).

The governing bodies of each subnational administrative entity was known in broadest terms as a Party Committee (Partijni komitet; Partkom). Depending on the type of administrative division it represented, however, a partkom may have had a unique name.

There were five types of subdistrict entities, as listed above: the grad, that is, cities and towns; the selo, that is, villages (settlements with a population of 200 to 999 legally fell into this category); the kolpriv, that is, collective farms; the kombinat, that is, industrial combines - these were large factory complexes that also included housing, recreational and other facilities for the workers and their families; the seoska opština, that is, rural municipalities.

The partkom of a city or town was called a City (or Town) Committee (Gradski komitet; Gradkom).

The partkom of a rural municipality (which was defined by law as a grouping of three or more settlements of less than 100 population each) was called a Municipal Committee (Opštinski komitet; Opškom).

Military of the CSDS

The CSDS was constituted of 6 Soviet Republics:

Additionally, there were two other member states that did not last the entirety of the 1947-1999 existence of the CSDS:

The CSDS also had possession of several overseas protectorates: Mali, Togo (which later became the Togolese Soviet Republic), Gold Coast, Upper Volta and Kongo. These were granted independence in the 1950s and 1960s.

The Community of Soviet Danubian states was formed in 1947 following a civil war between the communists and the monarchists within the Danubian Confederation, which had begun in 1944. On July 19th, 1947, Josip Broz became head of state, with an aging Lenin as the General Secretary, Zinovyev as Foreign Minister and Bukharin as Minister of Homeland Affairs.

After the Danubian Army capitulated in 1941, the territory of the Danubian Confederation was divided between Austria, Hungary, Greece, Albania and the newly-formed puppet states: the Independent State of Croatia, the Independent State of Montenegro, SNORist Serbia and Radesku Dalmatia. Opposition to these occupation regimes caused the formation of resistance movements, resulting in the Communist Party of Danubia (CPD). The CPD as an organisation comprised people from, and drew support from, the whole of Danubia; as such, it represented a single Danubian entity.

The CSDS remained a small but important player in world affairs as it maintained close ties with former Austro-Dalmatian colonies in Africa.

The capital was located at Užice in the SaSR (nowadays in Serbia).

As the old communists died off, the party began to weaken, and with Broz's death, the CSDS was moribund. In the seven years from 1981 through 1988, the CSDS weakened rapidly, although none outside could have predicted the civil war that would have erupted in 1988.

After Broz died, a Croat named Fraňo Tuďman became head of the Communist Party of the CSDS and thus the President of the CSDS. Tuďman was a Croatian nationalist, and had spent three years in prison for nationalistic activities. With his election the other member states quickly elected their own nationalistic Premiers, Slovenia elected Tomaž Hoštnik; Serbia elected monarchist Slobodan Milošević; Sanjak elected Mustafa Izetbegović, who would later become the Ajatallah of the Islamic Republic of Sanjak; Bulgaria, Yasen Yotov and Dalmatia elected Radu Pilatu, whose party held control of Dalmatia until the most recent general elections.

In 1983, the CSDS and Russia finally clashed with with their client states in Bornei-Filipinas, culminating with each other dropping a nuclear bomb. As a result, Zlatan Isovic was forced to resign and Tuďman took over. Tudjman claimed that Isovic deliberately withheld troops from Sanjak, and let the soldiers from other republics suffer the fate of Russia's nuclear attack. His claim turned out to be true; no Sanjak-based division was sent to Filipinas and most casualties were Serbs, Croats, and Dalmatians. Slobodan Milosevic and Radu Pilatu protested against Sanjaki "backstabbing."

As more and more Croat-favorable laws were passed under Tuďmantensions grew in the CSDS until the BSR finally declared independence in February of 1988. The Bulgarian War of Independence lasted 9 days, although this was primarily the Croat-dominated CSDS Army units fighting their way out of Bulgaria. In the end of April, Dalmatia, Serbia and Sanjak all declared independence, at which point even the most conservative historians agree everything went to hell.

Serbia turned against Croatia and Sanjak almost simultaneously. The CSDS Army was expelled in short order from Serbian territory. The Serbian army wasted no time in moving to capture Eastern Slavonia from the Croats, but were quickly defeated. In the South, they quickly conquered Sanjak. This was a short-lived gain as arms and Mujahideen fighters flooded the country from the Islamic world. Quickly enough, the Serbians were routed from Sanjaki lands. 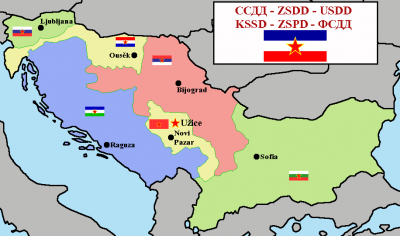 Map of the CSDS

Dalmatia was fighting at this time against Croatia in an effort to secure the Kozara and Baranya regions. With the Serbians on the offensive in Sanjak, Dalmatia turned and grabbed Kampa da Miarle (populated mostly by ethnic Dalmatians), thus increasing the size of the Dalmatian army, and were thus able to repel the Sanjaki Muslims over several battles. Well into the course of the war Slovenia declared independence, but their resistance was quickly crushed by the Croat army and were incorporated into Croatia.

Castile and Leon has been dubbed the Louisianne of Europe because of its endless shipments of arms to Dalmatia and Croatia in the course of the war. While these armaments were to be used against the Muslims, they were not infrequently used across the Croat-Dalmatian border. It must be said that when this news came to light in Castile and Leon, the shipments were halted.

The CSDS was the last major bastion of Communism as government in the world. The only remaining states today are Bavaria and Nea Illenicia.