Xliponian (the letter x is pronounced [ʃ]) is an Indo-European language spoken almost exclusively in the Kingdom of Xliponia. It is derived from the vulgar Latin of the Roman imperial conquerors who occupied the region in the early centuries of the Common Era. The main feature that distinguishes Xliponian from other Romance languages is the soundshift suffered very early by some consonantal sounds. The labials, velars and dentals of the original (vulgar) Latin were transformed as follows:

This Lautverschiebung affected word-initial consonants, but not all, and some medial and (to a lesser extent) final consonants were also shifted.

The alphabet – with pronunciations – is as follows:

(*) in foreign or dialectal words

Another characteristic aspect of Xliponian phonology is diphthongisation. The main vowel of the original Latin word becomes affected by that of the ending, generating evolutions like L panem > Xl fain, and likewise cantus > haunt, salix > sailq. Latin ae and oe became ai and oi respectively.

As an example, the numerals from 1 to 10 are as follows in Modern Xliponian:

[Compare this with Swadesh lists in other languages]

Some Points of Grammar

Plurals of Nouns and Adjectives

Mauncar "to eat" - paradigm for verbs in -ar

Piper "to drink" - paradigm for verbs in -er and -ir

Some Useful Expressions and Words

Names of the Letters of the Alphabet

Xliponian spelling was regularised in the mid-19th century. Before that, two main alternative spelling modes were in effect beside the present one. They may still be seen in ancient texts and inscriptions.

They are the Latinate and the Venedate spelling, based respectively on those used by several other Romance languages, and on Wenedyk. The main differences from the present mode are as follows [noted as Present < Latinate; Venedate]:

Sometimes a circumflex or a tilde was written over a, e, i, o for au, eu, iu, ou;
Sometimes an acute or a macron was written above a vowel preceding a doubled consonant (which was then spelled single).

The Babel Text in Xliponian

Interest for Tintin in Xliponia was fuelled by the Syldavian adventure (a roman à clef of sorts), and translations into the Xliponian language started in 1940, always published by Bernard & Croll. The main characters are called Tintin, Milu, Capitan Hadoc, Profesor Trifon Geliçorf, Carol ac Karol.

The titles of the Xliponian books (Abençuri a Tintin [aben'tsurjə tin'tin] - a “of” normally pronounced as schwa) are pronounced as follows:

The covers of the Xliponian albums: 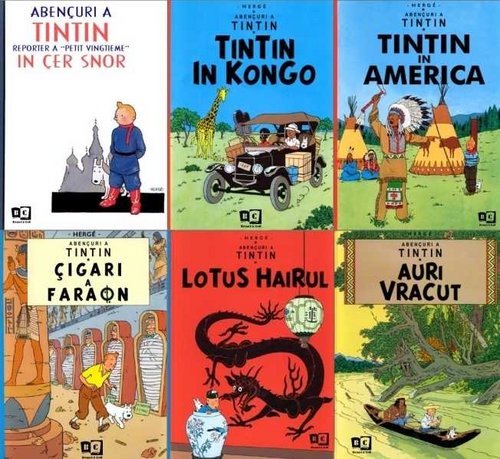 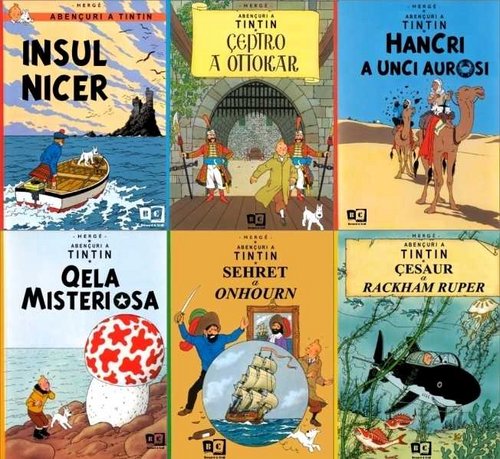 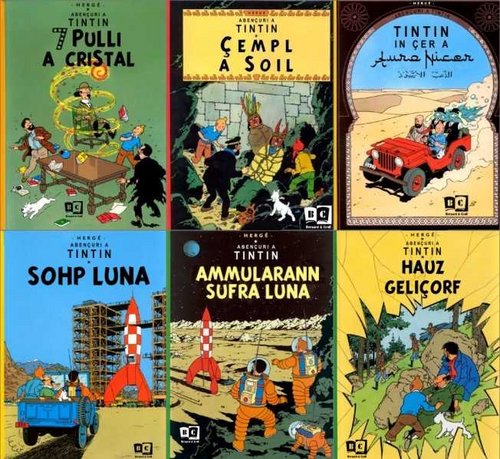 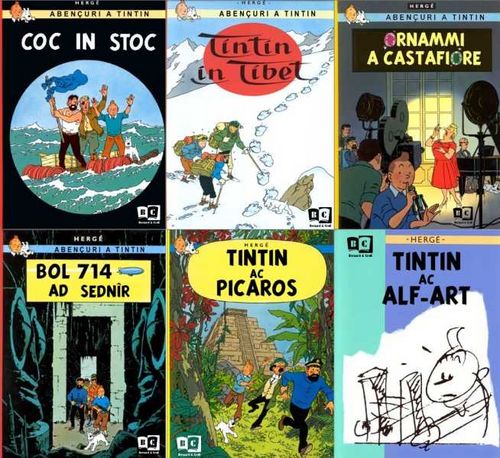