Romania, or more officially the Romanian Federation, is a federation formed between the three countries Muntenia, Oltenia and Moldova.

Situated at a crossroads of civilizations, graced with a harmoniously distributed relief, the Romanian countries brought an original touch in the concert of universal history and culture, attesting to a tormented but no less glorious past. The history of the Romanians is, undoubtedly, part of the European history, perhabs one of the most eventful.

Born, like the other Romanic people, in A.D. 1st millennium, the Romanian people has continuously inhabited the selfsame geographical place from the old times to this day, a space where its forefathers belonging to the Thracian king had arrived as early as the 2nd millennium B.C.

Today the Romanians are the sole descendants of the Eastern Roman world, and their language, along with, for example, Castilian, Portuguese, Brithenig, Francien, Dalmatian, Italian, and Wenedyk is one of the major offspring of Latin. They are the sole people who by their name - Roman (deriving from the Latin romanus) have preserved to this day the memory of the Seal of Rome, a memory to be perpetuated later in the name adopted by the federation state of the Romanian countries. It is a Romanic isle that has endured in a sea of Slavic and Finno-Ugric neighbours, in a region that had been devastated for more than a millennium by all the migratory waves known by Europe.

The governing body is the Federal Council which consists of representatives from the legislatures, judiciaries, militaries, civil services, royalties and executives of each member. Each Councillor is chosen in a way selected by the member-state and approved by the Council itself (the process, not the result). This council meets at least once a year, but generally divides itself up into subcommittees that meet more often to deal with specific issue brought before the Federation as a whole. Coordinating all this is the President of the Federation, elected by the Council for a five-year term from among adult Romanians. Technically not a member of the Council, the President does preside over it and can break any tie. More importantly, the President and his/her staff help set priorities and organize the work of the Council.

In order to vote, the Federal Council requires a forum of a majority of representatives from each of the Member States.

The Princes of Oltenia as well as the monarchs of Moldova and Muntenia retain the power to veto laws enacted by the Federal Council. However, their vetoes merely delay implementation of the laws for two years.

The Romanian Federation is formed by the three countries Muntenia, Oltenia and Moldova. Each country is divided into counties (judeţe) that in turn are composed of towns (oraşe) and rural municipalities (comune). 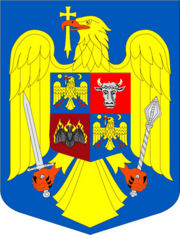 The Romanian people were separated for much of their history and ruled by different nations. By the start of the 19th century, Muntenia was under the rule of the Ottoman Turks, while Oltenia was under Hungarian rule and Moldova a part of Russia. This changed when Muntenia broke free from the Turks in 1877 followed later by Oltenia and Muntenia who emerged as independent nations during the First Great War.

Not long after the war, the first ideas of Romanian unification were born and the first outlines are made for the establishment of a united Romanian nation. The plans met difficulties due partially to the different backgrounds of the three Romanian nations. However, due to the initiatives of the great Muntenian king Carol I, the plans of uniting the Romanian people came closer than ever before. Carol I was a very popular king and his vision for a future Romania, the ‘‘Romanian Union’’ (‘Unirea Română’) as he referred to it, has even been used today as a role model for the formation of the modern Romanian Federation. Attempts were made to to introduce a common currency, but this would faced too many problems and failed to reach any success.

The Second Great War and the introduction of SNORist regimes in the Romanian nations would, in addition to making daily life more difficult, lead also to further separation, as the SNORists considered a united Romania a threat against Russian interests and therefore the leaders of the regimes worked to increase the perceived gaps between the three nations, shattering any feelings of a Romanian commonwealth by promoting Muntenian, Oltenian and Moldovean interests above all others.

Russian control over its satellites remained unstable, despite a large presence of Russian troups in the territory. Muntenia's leader Gheorghe Milţeanu, whose ideology was close to the SNOR, reigned over his country with terror, but rather than being servile to Moscow he developed his own independent foreign policy of cooperation with the CSDS and the West. In Oltenia, the SNOR built ethnic tension by favouring the Serbian population over the Romanian, and by using members of the Hungarian minority for the dirty work (secret police, etc.) thus directing the population's hostility against the Hungarians and distracting the populace from the Serbs and the SNOR itself. In Moldova, the most servile of Russia's satellites, Russia made effort to artificially boost the share of Russians and Ukrainians by supporting an emigration policy; while the figurehead president himself was a Moldovan, most other powerful positions were held by emigrated Russians and Ukrainians, eventually causing an increased popularity of "Romanism" among the Moldovans.

overview map of the Romanian Federation

The network of rivers is radial-shaped, with around 90% of the rivers springing from the Carpathian Mountains and being collected directly or through tributaries by the Danube. The Danube, the second longest river in Europe (1,932 mi), flows on Romanian territory (Oltenia and Muntenia) along 726 mi and empties into the Black Sea through three arms (Chilia, Sulina, Sfântu Gheorghe) which form a delta. The other main rivers are: the Prut, the Olt, the Nistru, the Siret, the Ialomiţa, the Argeş, the Mureş.

There are around 3,000 lakes, but not more than 1% of them have an area exceeding 1 sq.mi. More important are the lagoons and the Black sea coast lakes (Razim 206 sq.mi., Sinoe 78 sq.mi.) and the lakes along the Danube bank (Oltenia 10 sq.mi., Brates 9 sq.mi.). Glacial lakes are mostly spread in the Carpathian Mountains (Lake Bucura, 42.8 jg, is the largest of them). Out of the man-made lakes, the most importants storage lakes for power generation are those on the Danube, at the Hydro-Power Plants of Iron Gates II (160,000 jg) and Iron Gates I (40,000 jg - but with water volume - 92,500 million cubic feet - three times as much as that of Iron Gates II), and also the storage lakes of Stânca-Costeşti (23,400 jg) on the Prut and Izvoru Muntelui on the Bicaz river (12,300 jg).

A map of Romanian Federation showing the administrative divisions of the three countries and the most important towns.

The Romanian Federation has a temperate-continental climate of transitional type, specific to Central Europe, with four clearly defined seasons. Local differences are caused by altitude and by slight oceanic (to the west), Mediterranean (to the south-west) and continental (to the east) influences. In winter time the mean temperature falls below -2° and in summertime it ranges betwen 13° and 14°. The mean annual temperatures is 7° in the south of the country and 5° in the north of the country. The absolute minimum temperature registered was -23.1° at Bod in the Braşov Depression, and the absolute maximum temperature was +26.7° (at Ion Sion in the Bărăgan Plain). Annual rainfall average slightly decreases from west to east; mean annual rainfalls total 637 mm, with higher values in the mountain areas (900 - 600 sc/year) and lower values in the Bărăgan Plain (300 sc/year), Dobrudja and the Danube Delta (250 sc/year).

The topography of the federation is varied. The Carpathian mountains form a horseshoe in the northwest (Oltenia), comprising over one fifth of the total land area. Moldoveanu, the highest peak in the country, is in the Oltenian Alps to the south; these Alps continue south to the gorge of the Danube at the Banat Mountains. In the west are lowlands that are part of the Tisza Plain, a region in western Oltenia usually referred to as the The Banat, adjacent to the border with Hungary, Croatia and Serbia.

The most extensive plains are the lowlands of Muntenia and the Coast, located between the Oltenian Alps and Bulgaria, and of Moldova, east of the Carpathian Mountains. Bordering the Black Sea in the extreme east and forming part of Dobruja is a low plateau, which continues south into Bulgaria.

Romania is bordered by:

Already in the first years after the federation between the three nations had been formed in 1990, the first discusions about the introduction of a common currency had begun but due to an unstable economic situation and some smaller dissonance regarding the arrangement and administration of this new currency, it was not until the beginning of the 21st century that the new leu was put into circulation.

On 1 July 2002 the new coins and banknotes were introduced for the very first time. To prepare people for the transition and reduce the risk of increased prices, shops were obliged to display prices in both old and new currency already four month earlier in addition to a bigger information campain.

The old local currencies remained legal tender in parallell with the new common currency until 1 January 2004 when the three older currencies were finally taken out of circulation.

The new leu is issued in the following denominations:

While the three constituents of the Federation have very strong cultural differences, there is a Pan-Romanian sentiment.

Until late 18th century the fine arts in the Romanian lands followed two distinct traditions: the Byzantine tradition (the two Romanian states and the Orthodox zone represented by the Romanian Transylvanians) and the Western tradition (the Transylvanian zones inhabited by Transylvanian Saxons, Magyars, Szecklers and the Banat areas populated with Swabians). This division, even more striking in arts than in architecture, where sylistic interferences were quite frequent, was caused by the rigorous iconographic programmes imposed by religion, although, in some Orthodox churches in Transylvania, one can see valuable works clearly influenced by western-type trends (the Gothic-style paintings at the Strei village church, in the present county of Hunedoara, dating back to the 14th century).

The end of the 18th century and the beginning of the 19th century heralded a real start in Romanian literature. It was a period of evolution and breakaway of the structural universe specific to literature from the nonhomogeneous and polychrome area of the earlier written culture. Moreover, it was a final breakaway from the previous cultural world, determined by a radical change of the Romanian society (an accelerated process of westernisation and liberalisation, the change of the literary language by its connection to the European styles, as well as of the institutional aspect of culture).

The rural architecture, the national costumes, the utilitarian units, the dances and the folk songs are almost the same as those 2000 years ago. The Romanian people experienced numerous barbarian invasions, and empires tried to conquer its homeland, but it tried to preserve its spirituality by keeping its faith and culture untouched.

Oltenia is Byzantine Rite Catholic, while Moldova and Muntenia are predominantly Eastern Orthodox.