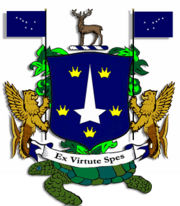 The NAL itself did not initially have an official COA. Benedict Arnold designed a proposal for such in 1805, but it failed to generate much enthusiasm. His included nineteen black hearts to represent the first breakaway provinces of the new nation. During the 1828 War Parliament did authorize a more-or-less official COA, essentially using the flag as its template. This was used intermittently until 1873, when a new design was approved. But this design--which used the Covenant Star--only concerned the actual blazoning and the motto "Ex Virtute Spes" ("From Virtue, Hope"). The crest, supports and other details changed with administrations, fads, and the whims/tastes of bureaucrats. Not until 1996 did an Act of Parliament create an American College of Heralds, which in 1999 issued a definitive achievement of arms for the North American League. 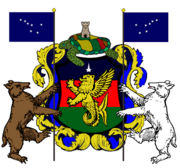 official arms of the American College of Heralds
Created by a 1996 Act of Parliament, this body reports directly to the Viceregal College. In practice, the College regulates heraldry within the NAL, grants new armorial bearings, and coordinates with similar organizations worldwide.

In theory, the members of the Viceregal College are the heads of the College of Heralds and no arms may be granted without their consent. Practically, this is rarely an issue.

Actual work by the College is done by a Lord President of Arms, by a variety of Heralds (each given an area of responsibility such as the South, New England, Native Tribal Provinces, North, etc.) and their staffs. Their offices are provided by the government for a rental fee of one pound per year.

Bestowing arms results from one of two processes: First, an individual may simply purchase an armorial bearing for a price of (usually) around one thousand pounds. Technically, the payment is the equivalent of a gratuity, because the actual awarding of the arms is still at the discretion of the College. However, almost any adult citizen in good standing willing and able to go through the process will almost certainly receive their grant. Second, a person may be awarded arms for service. In general this means (among others) anyone who becomes a knight, wins the Parliamentary Medal of Honor or a Nobel Prize, becomes General Moderator, or distinguishes themselves in some other manner. The Heralds alone have the right to design any particular coat of arms, although they will in general attempt to listen to any requests.

The College also works in tandem with several reputable genealogical services and organizations. This is in line with their mandate to try and reference familial arms when possible (as that of Johnathan Gotlieb Penn below).

American heraldry makes a deliberate attempt to incorporate Native Tribal imagery as well, such as the turtle in the official NAL arms, the moose, elk and otter as well as mythological creatures such as the seapanther and wendigo or even the Owl Man.