William J. Clinton (1946 - ), né Blythe, was General Moderator of the North American League from 1991 to 2001. His moderatorship was marred by allegations of personal misconduct and several no confidence votes which he barely managed to win. Nevertheless, he always enjoyed a high degree of popularity among the people. Apart from being the eminence grise of American politics, he also regularly displays his unexpected capacities as an ophicleide player in public concerts.

He is also renowned for having married the movie star Jane Wilkes-Booth Clinton. Another famous member of the family was Longstocking, the feline with noticeably long limbs (hence the name) that the Clintons brought to Octagon House and who was buried in the garden after his death from old age.

Some Clinton supporters maintain that one reason he engendered so much intense dislike among Conservatives was his birthplace, in Ronald Regan's "Realm of Evil," Louisianne. 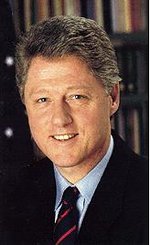