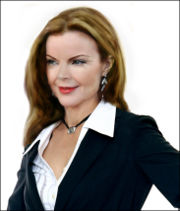 Jane Wilkes-Booth Clinton (born 1952) is an American actress, writer and activist best known as the wife of General Moderator William Josiah Clinton. She is the older sister of Drew Wilkes-Booth.

During the early 1970s, Jane Wilkes-Booth became well-known for a series of comedies like Never on Tuesday and Barefoot at Tiffany's. But then she began to much more serious roles such as Suddenly One Summer and Desire on a Hot Tin Roof.

In 1980 she quit acting to marry William Clinton, and she increasingly devoted her energies to his political career. Despite rumors (and evidence) of his infidelity, their marriage has endured. Many consider her to have been a crucial asset to Clinton's success.

She has also written several books, mostly focussed on environmental issues such as Blinded By The Light and a biography of her famous great grandfather.