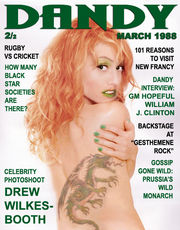 March 1988 cover of Dandy magazine featuring Drew on the cover

Drew Wilkes-Booth (born 1959) is an actress and model, the great-grand-daughter of the famous XIXth century actor John Wilkes Booth (who changed his name from simply "Booth" to distinguish from his father and brothers). She is also the younger sister of Jane Wilkes-Booth Clinton.

After attending school in Philadelphia, Drew began acting on Off Off Broadway and was eventually discovered at age 20 for the film Gemini (1979), a supernatural thriller about a doppelganger. This film was the first of several in which she appeared nude. Her next film, Bad Girl (1980) was a period piece set during the Crisis of 1875 in which she played a New Amsterdam prostitute. Unfortunately, this appearance may have further destablized a young man named Ion Hixon who in 1980 assassinated James Wainwright evidently in an effort to "earn" her love. The scandal continued to haunt her for years afterwards.

Wilkes-Booth made a series of films over the next several years, as well as making a name for herself as a model. One of her most famous roles remains that of "Oona" in the hit Ape World (1981). She also posed nude for the March 1988 edition of Dandy magazine, which was one of their best-selling issues ever.

Drew Wilkes-Booth has never married, although she has lived with musician Greg Russell since 1987.