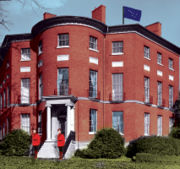 Octagon House, official residence of the General Moderator of the NAL

Octagon House is the present official residence of the General Moderator of the NAL. Constructed in 1822, this mansion was actually one of many similar such designs built in the NAL during the 19th century. None other, however, grew to be as well-known.

The central section of the original three-story structure is a domed hallway in the shape which gives the house its name. The East and West Wings extend outward from there and have been expanded many times, most recently during the Second Great War. By tradition, the General Moderator's family dwells in the West Wing while official business takes place in the East Wing (location of the famous "Oblong Office").

Across the street from Octagon House stands the Laurier Monument which has been the traditional location for General Moderators to take the oath of office since 1971.

Previous to the current residence, the first General Moderators lived in the Red Palace, or old Governor's Palace, a few blocks away near the old Staathaus (now Convention Hall). Built in the mid 1760s, the modest red brick structure was enlarged in 1803 to house General Moderator Whittington and his household and staff. Several apartments were added in subsequent years to house visiting dignitaries and guests. In 1823, when General Moderator Monroe moved into the new house, the old Red Palace was converted into an inn and tavern. The inn was gutted in 1899 and made into one of Philadelphia's city libraries. In 1994, the building was converted into an arts center and concert hall where small groups offer performances and local artists offer showings.