Tomos Armstrong Kuster was a flamboyant, controversial figure in his day who owed much of his political success to a clever marriage. In 1865 he married Katherine Chase (1840-1920), daughter of Senator (later Attorney-General) Samuel Chase of Kent. She was a prominent social belle in Philadelphia and upon wedding the handsome young cavalry officer did much to further his eventual political career. It was at her insistence that he, Kuster, resign from the Continental Army at just the right time to challenge a Delegate from Virginia for reelection, thus entering Parliament himself. Her contacts helped him rise within the Conservative Democratic Party, eventually becoming Speaker of the House of Delegates in 1899. Kuster, the fifth generation of Prussian immigrants, was renowned for his large moustache and dashing manner. Antics such as firing a shot into the air to end an acrimonious debated helped make him one of the most colorful and well-liked politicians of the era. 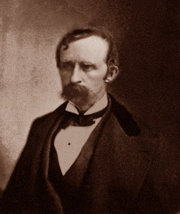 early photograph of Tomos A. Kuster

In 1901 he was chosen by his party as their candidate for General Moderator, and won in a narrow victory, but which he forever after treated as if it were a landslide. Initially his adminstration achieved much, often through sheer audacity. Yet less than halfway through, a series of scandals and failed programs forced him to accept compromise and a coalition cabinet. His wife in particular railed against this, portraying Kuster as an idealist backstabbed by corrupt office-seekers. By the end of his term, Kuster had gone from intense personal popularity to having prominent newspapers and even leaders of his own party call for his resignation. Certainly in his last two or three years he began to drink heavily, and continued to do so once out of office. He died within another two years, whereupon his widow embarked on a campaign to resurrect his image in the public eye. She published a memoir, Kuster's Wife (1915), which caused enough of a furor that some persons (including Jeremiah Jennings Bryan) threatened to sue for libel. However, it was also the equivalent of a best-seller and some credit it with helping the Conservative Democrats regain the Oblong Office. Upon her death in 1920 she was buried beside her husband in Richmond.

He was also famous for occasional malapropisms, including one famous case where he referred to Ýstin Molineir’s exposé The Jungle as “socialistique lies”, leading to much mocking from the press. http://millennium.macvillage.net/general_moderators2.html